Q.2 Give any two examples of ancient towns of India?
Ans. (i) Varanasi
(ii)Prayag (Allahabad)
(iii)Patliputra (Patna)
(iv)Madurai [any two)

Q.7. Define Tourism?
Ans. Tourism is travel undertaken for purposes of recreation rather than business. Tourism has been developed as the world’s single largest tertiary activities.

Q.8. ‘There is mutual interaction between the elements of Physical Geography’. Support the statement with the suitable examples.
Ans. (i) Elements of Physical Geography like landforms, climate, soil, vegetation etc. affect houses, roads, and rail-links etc which are parts of Human Geography.
(ii)Human beings use the natural resources and create a cultured landscape while physical environment also modifies the human efforts.
(iii)Physical and Human Geography have impact on each other and closely correlated.

Q.9. Explain the meaning of technopolis. Give two examples.
Ans. These are high tech industries which are regionally concentrated, self sustain and highly specialized.
(i)Silicon Valley near San Francisco
(ii)Silicon Forest near Seattle

Q.10.When was National Youth Policy launched by the Government of India ? Write down major thrust areas along with its values.
Ans. National Youth Policy in 2001. The main aim of National Youth Policy is to promote overall development of the youth and adolescents to develop their potential and skill in the qualitative and constructive development of the country.
The major thrust areas of it are:
•Make youth more responsible and capable in decision making.
•More stress given towards the gender empowerment to reduce the parity between male and female socio-economic status.
•More concern given towards the youth health, sports recreation and creativity.
•High awareness towards new innovations in the spheres of science and technology.

Q.11. State any two characteristics each of the three distinct cropping seasons of India.
Ans. Kharif Season-
(i)It coincides with southwest Monsoon and prevails between June to September.
(ii)Rice, Maize, Ragi, Cotton, Jowar, Bajara are the main crops of the seasons.
Rabi Season-
(i)The season begins with the onset of winter in October and lasts up to March – April.
(ii)Wheat, Grams, Mustard, Groundnut are the main crops of this season .
Zaid Season-
(i)This is short duration season from April to June.
(ii)Vegetables, fruits, fodder crops and melons are largely grown in this season.

Q.14. Give the meaning of human development. Explain the four pillars of human development.
Ans. Development is a multidimensional process involving reorganisation and reorientation of the entire economic and social system.
Equity, sustainability, productivity and empowerment are the main components of human development. These are briefly explained below :
•Equity: This term ensures equal access to opportunities available to people as it must be equal to all, irrespective of their gender, race, income and caste (in the Indian case). This is not only applicable in the Indian context but also happens in almost every society.
•Sustainability: Means avoiding depletion of resources, and conserving them for future generation. So that they can also use and develop natural resources for their need. All natural, financial and human resources must be used judiciously without their exploitation
•and keeping in mind the future generation. The misuse and over utilisation can deplete the resources.
•Productivity: Refers to the enhancement of the efficiency of the labour force. Skilled and efficient labour force are capable of showing their high capabilities and potential in the labour market. Better health facilities, balanced diet and high literacy rate leads to the better work productivity of the human beino (labour),
•Empowerment: It is related to the freedom to make choices and power comes from raising freedom and capability. Enhancement of human development should lead to creation of capabilities through improved health, knowledge and skills.

Q.15. Explain the five main types of urban settlements depending on the size and service available.
Ans. The urban settlements mainly depend on the size and the service available and functions rendered. Urban centres are designated as follow :
•Town. It is a place having a municipality or an area under notified area committee. The population ranges from 2,000-20,000. It may have predominance of tertiary functions as well as headquarters, stations, colleges etc. .
•City. It has a population more than 1,00,000. It is diversified and might have transport terminals, regional administrative offices and major financial institutions. Cities are more larger than towns.
•Conurbation. The term ‘conurbation’ is first used by Patrick Geddes in 1915. Cities or towns coalesce with each other due to expansion of industries and grow together economically but politically indifferent Greater London, Noida, Gurgaon, Chicago are the examples.
•Megalopolis. The term ‘Megalopolis’ derived from Greek word which means ‘Great City’ and this concept was popularised by Jean Gottman (1957). It is a chain of metropolitan areas coalesce to form Megalopolis. It has super metropolitan character with the greatest urban growth and was named by Jean Gottman. Washington and Boston of the USA are the best examples.
•Million city. The number of million cities in the world has been increasing as have earlier. London reached the million mark in 1800, followed by Paris in 1850, New York in 1860.

Q.16. Describe any five factors influencing industrial location in the world.
Ans. Following factors favour the localisation of an industry :
•Nearness of Raw Material : The heavy and basic industries are mainly localised near the source of raw material, as the raw material is the soul of the industries. They are established in the area surrounding the raw material to minimise the transport cost. The sugar industries are located near the raw material, as sugar cane is a perishable product and delays in transport affect the production. The heavy raw material based industries are found generally near the availability of the raw material. The paper and pulp industries and saw mills are located in the coniferous forest region due to easy availability of the raw material.
•Power Resources: Coal, petroleum and hydro-electricity are the chief sources of power.
The heavy industries need power in abundance. These industries are generally localised near the areas where power is easily available. The Damodar valley in India and the Ruhr valley in Germany are the main industrial centres due to coal and hydro-electric power. The iron and steel industry, fertiliser, aluminium and copper smelting are power intensive industries, hence located near the sources of power.
•Means of Transport: The means of transport ate the ‘arteries and veins’ of industries, as these connect the producer to consumer. Hence industries are set up in those places which are endowed with cheap, quick and abundant means of transport.
•Suitable Climatic Condition: Climate plays an important role in their establishment. The cold climate affects health and ultimately the efficiency of work and the damp climate is helpful to the cotton textile industry. The dry atmospheric conditions are helpful for the aircraft industry.
•Abundant and cheap Labour Force: The skill and technique of manufacturing something is very essential. The skilled labour and technique of appliances increases the quality and quantity of production. The manufacturing of watches in Switzerland, toys and electronics in Japan, glass work in Firozabad and textile in Lancashire are famous due to skilled and specialised labour force.

Q.19. Name the two type of international trade. Describe two main features of each.
Ans. Bilateral and multilateral trade are the two types of international trade.
Bilateral Trade
(i)The exchange of commodities between two countries takes place.
(ii)It happens if the economies of the two countries are complementary.
Multilateral Trade
(i)The exchange of goods and services among a number of countries takes place.
(ii)The country may also grant the status of the ‘Most Favoured Nation (MFN)’ to some of the trading partners.

Q.21. On the outline map of the World, four features are shown by A, B, C and D. Identify the features with the help of the index and write their correct names against it:- (i) Major Seaport (ii) Mega City (iii) Major Airport
(iv)Continent with high growth rate.
(v)A Terminal station of Trans Siberian Railway 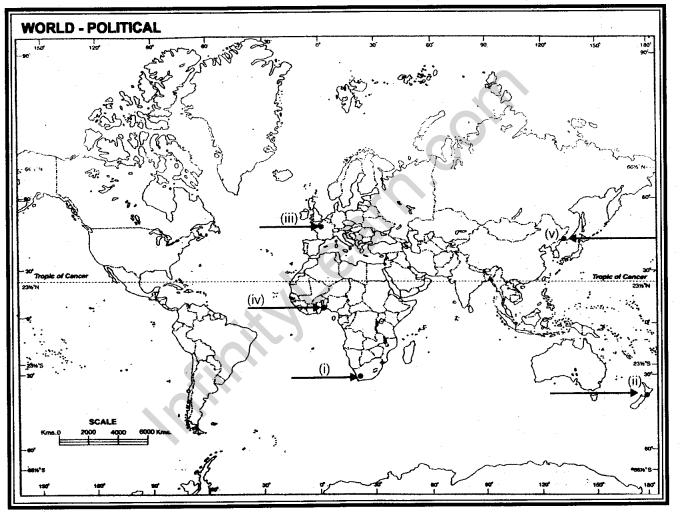 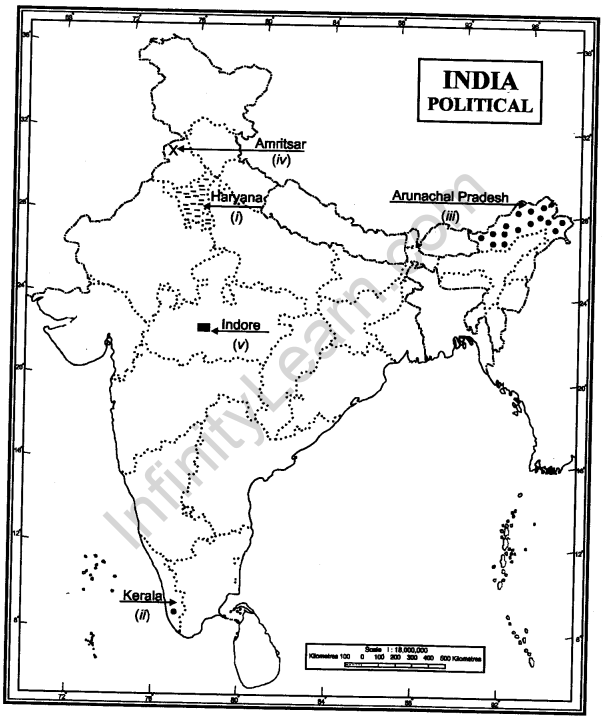