1. The directed rate of flow of electric charge through any cross-section of a conductor is known as electric current.
If ∆Q charge flows in time ∆t, then-current at any time t is

NOTE: Current density is a vector quantity.
3. Flow of Electric Charge in Metallic Conductors Among the solids, all metals are good conductors of electricity. The cause of conductance is free electrons.
In the Case of a Solid Conductor (i.e. Cu, Fe, Ag, etc) atoms are tightly bound to each other. There is a large number of free electrons in them.
In the Case of a Liquid Conductor Like an electrolytic solution, there are positive and negative charged ions that can move on applying an electric field.
4. Drift Velocity It is defined as the average velocity with which the free electrons move towards the positive end of a conductor under the influence of an external electric field applied.

6. Current density at any point of conductor,
j = neededd
where, j is a vector quantity.
7. Mobility The ratio of the drift velocity of electrons and the applied electric field is known as mobility.

8. Ohm’s Law At constant temperature, the potential difference V across the ends of a given metallic wire (conductor) in a circuit (electric) is directly proportional to the current flowing through it.

The variation of current w.r.t. applied potential difference is shown with the help of the following graph.
V = IR
where R = resistance of the conductor
No effect of V and I on R because as V increases, I increase but R remains the same.

9. Resistance of a Conductor Mathematically, it is the ratio of the potential difference applied across the ends of the conductor to the current flowing through it.
=> R = V/I
SI unit is the ohm (Ω).
Resistance can also be written as,
R =ρ L/A
where, L = length of the conductor, A = area of cross-section and ρ = constant, known as the resistivity of the material. It depends upon the nature of the material.

10. Relationship between resistivity and relaxation time

12. Temperature Coefficient of resistance is given by

13. Conductivity It is defined as the reciprocal of resistivity of a conductor.
It is expressed as, σ = 1/ρ
SI unit is mho per metre (Ω-1/ m).

14. Superconductivity The resistivity of certain metals or alloy drops to zero when they are cooled below a certain temperature is called superconductivity. It was observed by Prof. Kamerlingh in 1911.

17. If a conductor is stretched or compresses to n times of original length, then
I’d = NL => R’ = n2R
where, R’ = new resistance and R = original resistance. 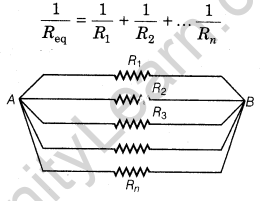