Q.3. What is the ethnic composition of Sri Lanka ?
Ans. Sri Lanka has a diverse population. The Sinhalese community forms the majority of the population (74%) with Tamils (18%) who are mostly concentrated in the north and east of the island, forming the largest ethnic minority. Other communities include the Muslims. Among Tamils, there are two sub-groups. The Tamil natives of the country are called ‘Sri Lankan Tamils’ (13 %). The Tamils, who were brought as indentured labourers from India by British colonists to work on estate plantations are called the ‘Indian Origin Tamils’ (5%). Most of the Sinhala-speaking people are Buddhists, while most of the Tamils are Hindus or Muslims. There are about 7 per cent Christians, who are both Tamil and Sinhalese.

Q.4. Mention any four steps which were taken by the Sri Lankan government to achieve majoritarianism. [CBSE Sept. 2010, 2012]
Ans. (i) In 1956, an Act was passed under which English was replaced as the country’s official language not by the Sinhala and Tamil but by the Sinhala only.
(ii) The governments followed preferential policies that favoured the Sinhala applicants for university positions and government jobs.
(iii) A new constitution stipulated that the state shall protect and foster Buddhism.
(iv) Denial of citizenship to estate Tamils.

Q.5. What is a Civil War? Explain with context to Sri Lanka.
Ans. (i) It is a violent conflict between the opposing groups within a country, for example the Sinhalese and the Tamils.
(ii) Due to the violent conflict between both these ethnic groups thousands of people of both the communities have been killed. Many families were forced to leave the country as refugees and many more lost their livelihoods.
(iii) The civil war has caused a terrible setback to the social, cultural and economic life of the country.

Q.6. What is community government ? Explain the concept of community government with context to Belgium. [CBSE 2014]
Ans. (i) A community government is one in which different social groups are given the power to handle the affairs related to their communities. They are expected to work jointly for the benefit of the common masses without undermining any one community.
(ii) The ‘community government’ is elected by people belonging to one language community-Dutch, French and German speaking – no matter where they live.
(iii) This government has the power regarding cultural, educational and language-related issues.

Q.7. What is the relationship between democracy and power sharing ?
Ans. ‘Democracy’ means giving every citizen the right and power to make the decisions through their elected representatives. Power sharing is dividing power among various social groups to give them equal representation in the governance. Power sharing is the essence of democracy where every individual, irrespective of cultural and language differences feel involved in the political system.

Q.8. How did the Sri Lankan and the Belgium government try to solve the ethnic problem ?
Or
Explain any two important differences between the power sharing model accepted by Belgium and Sri Lanka. [CBSE 2013]
Ans. (i) The Belgium leaders tried to solve the ethnic problem by respecting the feelings and interests of different communities and regions, whereas the Sri Lankan government tried to solve the problem through majoritarianism.
(ii) Belgium leaders established a federal structure under which power was shared between the Union Government and its other constituent units whereas Sri Lankan leaders adopted Unitary Government structure.
(iii) The Belgium solution helped in avoiding civic strife whereas the majoritarianism in Sri Lanka led to the civil war.

Q.9. “Both Belgium and Sri Lanka are democracies but they follow different systems of power¬sharing. ” Support the statement by giving three points of difference. [CBSE 2012]
Ans. (i) Type of Government: Sri Lanka continues to be, for all practical purpose, a unitary system where the national government has all the powers. Tamil leaders want Sri Lanka to become a federal system under which the regional governments were given constitutional powers that were no longer dependent on the central ‘government. Belgium shifted from a unitary to a federal form of government.
(ii) Religion and Government : To accommodate people belonging to different ethnic groups Belgium formed a ‘community government’ whereas Sri Lankan government passed a law to protect and promote Buddhism.
(iii) Language and government : In 1956 Sri Lankan government passed an act to recognize Sinhala as the only official language whereas Belgium government “tried to protect and foster all the languages spoken by the people.

Q.10. What is power sharing ? Explain.
Ans. (i) The concept of providing a permanent share of power in the government different communities or regions is termed as power sharing.
(ii) Under this the people and the leaders of the nation respect the feelings and interests of different commodities and regions.
(iii) The principle of power sharing is very important for the unity and growth of democracy.

Q.12. “Power may also be shared among different social groups”. Explain by giving examples.
Ans. (i) Power may also be shared among different social groups such as the religious and linguistic groups. ‘Community government’ in Belgium is a good example of this
arrangement.
(ii) In some countries there are constitutional and legal arrangements whereby socially weaker sections and women are represented in the legislatures and administration. For example in India we follow the principle of ‘reserved constituencies’ in assemblies and the parliament of our country. This type of arrangement is meant to give space in the government and administration to diverse social groups who otherwise would feel alienated from the’ government.
(iii) This method is used to give minority communities a fair share in power.

Q.13. What is the difference between prudential and moral reasons for power sharing ?
Ans. 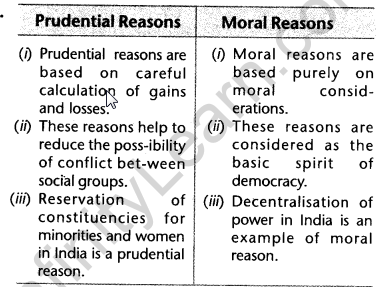