Question.1. Define a budget line.
Answer. A budget line graphically represents various bundles of two goods (i.e., all possible combinations of two goods) which a consumer can buy by spending his entire income at the prevailing prices.

Question.2. What is meant by inferior good in economics?
Answer. Inferior goods are those whose demand falls with the rise in the level of income.

Question.4. Define monopoly.
Answer. Monopoly may be defined as a market situation, where there is a single seller of a commodity and there are no close substitutes of that commodity.

Question.6. Explain the effect of the following on the price elasticity of demand of a Commodity:
(i) Number of substitutes
(ii) Nature of the commodity
Answer. See Q. 7, 2009 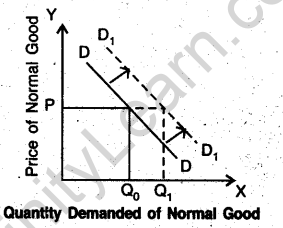 Or
Explain the inverse relationship between price and quantity demanded of a commodity.
Answer. The law of diminishing marginal utility states that as we consume more and more units of a commodity, the utility derived from each successive unit goes on decreasing. This law holds true under certain assumptions, i.e. a reasonable quantity of the commodity is consumed and that consumption is a continuous process. This law can be explained with the help of a utility schedule. 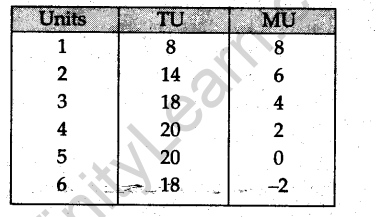 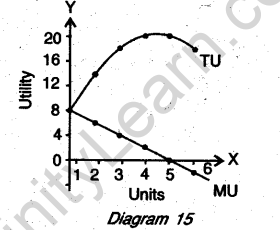 Answer. According to the law of demand, price and quantity demanded are inversely related, other things remaining the same. As Such, when price increases, demand for a good falls and when there is a decline in price of that good, the demand for it increases. As such, usually a demand curve slopes downwards.
The inverse relationship between price and demand can also be explained with the help of a demand schedule given below: 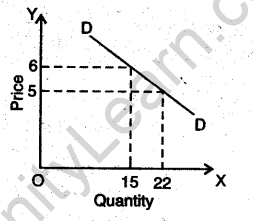 As is evident from the Schedule, when price increases, demand falls and vice-versa. This is shown by the demand cuiVe DD in the adjacent diagram.

Question.8. A firm’s average fixed cost, when it produces 2 units, is Rs. 30. Its average total cost schedule is given below. Calculate its marshal cost and average variable cost at each level of output.

Question.9. Total revenue is Rs. 400 when the price of the commodity is Rs.2 per unit When price rises to Rs. 3 per unit, the quantity supplied is 300 units. Calculate the price elasticity of supply?
Answer.

Question.10. Why is tile number of firms small in an oligopoly market? Explain. 3
Answer. Oligopoly is a market situation where the number of sellers is very small (more titan two) and each seller sells a substantial portion of the output of the industry. The number of sellers is so small that each seller knows the attitude of the rival firms.
Though the seller is free to pursue independent price policy, but in practice he does not change the price, because of the fear of retaliation by other sellers.
This is so because if he increases his price, others may not increase and his sale will fall. On the other hand, if he lowers the price others may also lower their prices and he may not get the benefit of that. Therefore price tends to be rigid under oligopoly.

Question.11. Explain the problem of ‘how to produce’.
Answer. The problem of ‘how to produce’ relates to the choice of technique by an economy for producing a commodity. Therefore, in view of the fact that resources are scarce, a cost effective technique is chosen Therefore the decision as to how goods should be produced, depends on the price of the factors. If labour is abundant and cheap, labour intensive technology of production would lead to cost effective production. In case labour is scarce mid costly, capital intensive technology would be used For Example, in a country like India, labour-intensive technique is adopted and in a country like Japan, capital-intensive technique is adopted.
Or
Distinguish between microeconomics and macroeconomics. Give examples.
Answer. Microeconomics studies the problems of individual economic units, such as a firm and industry, a consumer etc. As such the problems of consumer’s equilibrium, producer’s equilibrium, price determination, factor determination etc. are the part of the scope of Microeconomics. Its main tools are demand and supply of a particular commodity. Macroeconomics studies the economic problems relating to an economy, such as National Income, total savings, employment determination, etc. International trade and banking also form part bf Macroeconomics. Its mam tools are aggregate demand and aggregate supply of an economy. 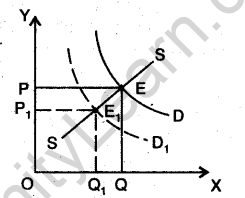 Question.14. State whether the following statements are true or false. Give reasons for yonr answer .
(i) When marginal revenue is constant and not equal to zero, then total revenue will also be constant.
(ii) As soon as marginal cost starts rising, average variable cost also starts rising.
(iii) Total product always increases whether there is increasing returns or diminishing returns to a factor.
Answer. (i) False. When marginal revenue is constant total revenue will be increasing.
(ii) False. MC cuts AVC from its lowest point but near the point of intersection AVC is falling and MC is increasing. 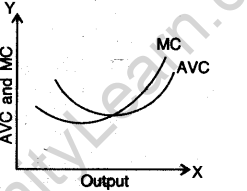 Question.15. What are the conditions of consumer’s equilibrium under the indifference curve approach? What changes will take place if the conditions are not fulfilled to reach equilibrium?
Answer. See Q. 14, 2010 (I Delhi)

Question.16. From the following schedule find out the level of output at which the producer is in equilibrium, using marginal cost and marginal revenue approach. Give reasons for your answer.

The equilibrium output will be 3, because at this level MR and MC are equal. The equilibrium will be Rs. 6. At any other level of ouput either MR > MC or MR < MC.
Or
Explain the law of returns to a factor with the help of total product and marginal product schedule.
Answer.See Q. 15, 2008 (I Delhi).

SECTION B
Question.17. Give the meaning of money.
Answer. Anything which is accepted as a medium of exchange is called money.

Question.18. What is meant by revenue deficit?
Answer. Revenue deficit is the excess of the government’s revenue expenditure over its revenue receipts.

Question.23.Explain the ‘banker to the government’ function of the Central Bank.
Answer.See Q. 23, 2010 (II Delhi)

Question.24.Explain the allocation function of a Government Budget.
Answer.An important function of a Government Budget is to allocate the resources on different items of expenditure. There are various items of expenditure for which money is allocated, for example, development projects, welfare activities like health care, education, etc. and many other items meant for the health of the country. On the basis of priorities and significance of the items Government allocates resources through its budget.

Question.26.Giving two examples, explain why there is a rise in demand for a foreign currency when its price falls.
Answer.See Q. 26, 2010 (III Delhi).

Question.30. How Primary deficit shows actual amount of borrowings of the government will you treat the following while estimating National Income of India? Give reasons for your answer.
(i) Dividend received by a foreigner from investment in shares of an Indian company.
(ii) Profits earned by a branch of an Indian bank in Canada.
(iii) Scholarship given to Indian students studying in India by a foreign company.
Answer. (i) It is factor income to abroad and, therefore, it should be subtracted from National Income.
(ii) Profits earned by aqjndian bank is part of income earned from abroad and, therefore, it will be included in National Income.
(iii) It is a transfer payment and hence not included in National Income.
Or
Explain the problem of double counting in estimating National Income with the help of an example. Also explain two alternative ways of avoiding the problem.
Answer. While estimating national product, the value of a commodity should be counted only once. If the value of a commodity is counted more than once, this is known as the problem of double counting, such as counting the value of sugarcane arid sugar both. Here, sugarcane used as raw material in the production of sugar has been counted twice. In the given example, we should only count the value of sugar which is a final product. Sugarcane is a raw material or an intermediate good. Therefore, while calculating the national product, value of intermediate goods should not be counted. In this way, by finding the value of final goods, the problem of double counting is solved..
The problem of double counting can be solved with the help of value added method also. This can be explained with the help of die example of production of sugar taken above. Let us say that the value of sugarcane is Rs. 1,000 and that of sugar Rs. 1,500. Here, in the first production stage, where sugarcane is produced, value added is Rs. 1,000 (sale price – cost of production) and during the second and final production stage where sugar is manufactured, value added is Rs. 500 (Rs. 1,500 – Rs. 1,000). Therefore total value added is Rs. 1,500
(Rs. 1,000 + 1500) which is equal to the value of final product i.e., sugar.

Thus the problem of double counting can be avoided either by finding value added or by finding the value of final goods. 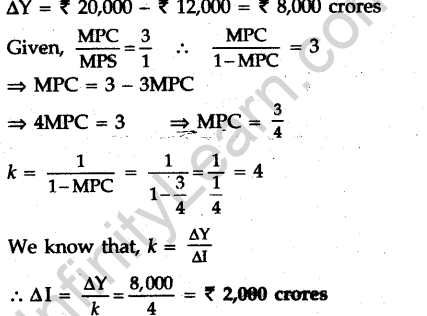 Question.32. Calculate (a) Gross domestic product at market price and (6) Factor income from abroad from the following data:

Note : Except for the following questions, all the remaining questions have been asked in Set I.
SECTION A
Question.2. What is meant by normal good in economics?
Answer. Those goods whose demand rises with the increase in the income of the consumer are normal goods.

Question.8. Given below is the cost schedule of a firm. Its total fixed cost is Rs. 120. Calculate the marginal cost and average variable cost at each level of output.

Question.12. The price elasticity of demand of a commodity is (-) 1.5. When its price falls by Rs. 1 per unit, its quantity demanded rises by 3 units. If the quantity demanded before the price change was 30 units, what was the price at this demand? Calculate.
Answer.

SECTION B
Question.18. Define tax.
Answer. A tax is a compulsory contribution which a person has to pay to the Government to defray the expenses of the Government.

Question.23. Explain the ‘lender of the last resort’ function of the central bank.
Answer. When commercial banks exhaust all resources to supplement their funds at the time of liquidity crisis, they turn to the central bank as a last resort.
As the lender oflast resort, central bank guarantees solvency and provides financial support to commercial banks (i) by rediscounting their eligible securities and bills of exchange and (ii) by providing loans against their securities. This saves the banks from failure and the banking system from a breakdown.

Question.32. From the following data, calculate (a) Gross domestic product at market price, and (b)Factor Income to abroad

Question.8. From tjte following cost schedule of a firm, calculate marginal cost and average variable cost at each level of output.

Question.12. Quantity demanded of a commodity rises by 6 units when its price falls by Rs. 1 per unit Its elasticity of demand is (-) 1. If the pnce before the change was Rs. 20 per unit, calculate quantity demanded at this price.
Answer.

Question.23. Explain the meaning of cash reserve ratio and statutory liquidity ratio.
Answer. Cash Reserve Ratio: It is that fraction of the deposits which commercial banks are required under law to keep as cash reserves with the central bank. CRR is a powerful instrument to control credit and lending capacity of the banks.
Statutory Liquidity Ratio is a part of the deposits which commercial banks have to keep with themselves. Banks are required to keep a fixed percentage of its assets in cash, gold or other securities. SLR is raised to reduce the ability of die banks to give credit.

Question.32. From the following data calculate (a) Gross domestic product at market price and (b) Factor income from abroad.