SECTION A
Question.1. Give meaning of an Economy.
Answer. The term economy refers to all the production units in an area by which people get their living.

Question.2. What is Market Demand?
Answer. Market demand is the sum total of demand by all the consumers of a commodity at a price during a given period of time.

Question.5. What is a price taker firm?
Answer. A firm is said to be a price taker when it has no role in the price fixation of a commodity and has to accept the price determined by the whole industry.

Question.6. What is opportunity cost? Explain with the help of a numerical example.
Answer. Opportunity cost is the next best alternative foregone in choosing a given alternative.
For example: Say on a given piece of land either rice or wheat can be grown. On this piece, if rice is grown its yield will be 10 tonnes. On the other hand, if wheat is grown its yield will be 8 tonnes. As rice is grown wheat cannot be grown. In other words, we forego wheat for growing rice. Therefore, in the given illustration, opportunity cost of 10 tonnes of rice is equal to 8 tonnes of wheat. Similarly, if we decide to cultivate wheat, then we have to forego rice production. In that case opportunity cost of wheat is the quantity of rice which we forego, i.e., 10 tonnes of rice. 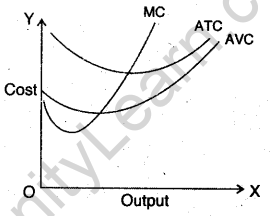 Question.10. Explain the implication of large number of buyers in a perfectly competitive market.
Answer. See Q. 10, 2011 (I Outside Delhi).
Or
Explain why are firms mutually interdependent in an oligopoly market.
Answer. In an oligopoly, although firms arc free to take decisions about price and output of the commodity, they are mutually interdependent because they have to take care of the reactions of other firms regarding their price and output decisions. If firms do not take care of the reaction of other rival firms, they may ultimately lose.

Question.12. When price of a good is Rs 7 per unit a consumer buys 12 units. When price falls to Rs 6 per unit he spends Rs 72 on the good. Calculate price elasticity of demand by using the percentage method. Comment on the likely shape of demand curve based on this measure of elasticity.
Answer.

Question.13. What does the Law of Variable Proportions show? State the behaviour of total product according to this law.
Answer. The law of variable proportions examines the production function assuming one factor as variable and other as fixed. It shows the pattern of change in total output when only one input is increased, other inputs remaining unchanged. In the short run, units of variable | factor change or increase the total product. In this context three phases or situations can be possible at an increasing rate. These are:
(i) In the beginning, when additional units of a variable factor are employed, total product increases at an increasing rate. This is phase 1.
(ii) After this point if more units of a variable factor are employed, total product also increases but at a decreasing rate. This is phase 2.
(iii) If additional units of a variable factor are still employed, total product starts declining. This is phase 3.
Or
Explain how changes in prices of other products influence the supply of a given product.
Answer. The supply of a commodity depends upon the prices of other related goods also. This can
be seen in the supply of substitute goods. If the price of a commodity X remains constant and the price of its substitute good A increases, the producers would prefer to produce substitute good A.
As a result, the supply of commodity X will decrease and that of substitute good A will increase. This will shift the supply curve of good X leftward. Similarly, an increase in the price of commodity X will lead to decrease in supply of the good A.
Also if the prices of some other products rise, the production of these becomes more profitable, so a firm may shift its resources from given product to production of other products. Thus, supply of given product falls. 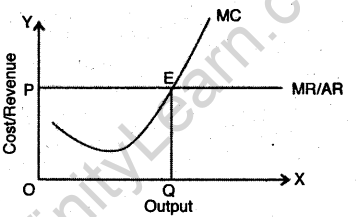 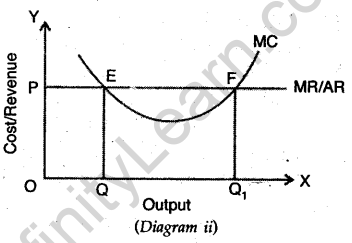 For Blind Candidates only in lieu of Q. No. 15 Explain the conditions of producer’s equilibrium in terms of marginal cost and marginal revenue. Use a schedule.
Answer. (i) According to the schedule given below the level of output will be 3 units because at this level marginal cost and marginal revenue are equal (MC = MR). Before 3 units the producer should not stop producing because he can have excess of revenue up to 3 units and beyond that he will incur losses because MC exceeds MR. 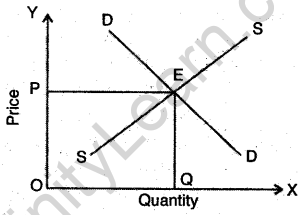 SECTION B
Question.17. Define stock variable.
Answer. Stock variable is that whose value is measured at a point of time.

Question.20. Define a Tax.
Answer. A tax is a legally compulsory contribution which is paid to the government.

Question.23. Explain the significance of the ‘Store of Value’ function of money.
Answer. It was virtually impossible to store surplus value under barter economy; the discovery of money has removed this difficulty. With the help of money, people can store surplus purchasing power and use it whenever they want. Money serves as a store of value for goods in liquid form. Saving in the form of money is not only secure but the possibility of it being destroyed is very less. Besides, money can be carried wherever it is needed. By facilitating accumulation of money, money has become the only basis of promoting capital formation.

Question.28. Explain the components of Legal .Reserve Ratio.
Answer. Legal reserve ratio is a certain minimum fraction of deposits which is legally compulsory for the commercial banks to keep as cash or in liquid form. There are two parts of this ratio— (i) Cash Reserve Ratio (CRR) and (ii) Statutory Liquidity Ratio (SLR).
Cash reserve ratio is the part of the deposits which is kept with Central bank as reserve in cash.
Statutory liquid ratio is the ratio of deposits which banks have to keep with themselves. In short

Question.30. Find out (a) National Income and (b) Net National Disposable Income:

Note : Except for the following questions, all the remaining questions have been asked in Set I.
SECTION A
Question.6. What is ‘Marginal Rate of Transformation’? Explain with the help of an example.
Answer. Marginal rate of transformation is the rate at which the units of one good have to be sacrificed to produce one more unit of the other good in a two goods economy.
Example: We can explain this with the help of an example. Suppose by employing given resources fully and efficiently the economy produces 1X + 10Y. As such if the economy decides to produce 2X, it has to reduce production of Y by 2 units. Then 2Y is the opportunity cost of producing 1X. In this case MRT is 2Y : 1X.

Question.9. A producer borrows money and opens a shop. The shop premises is owned by him. Identify the implicit and Explicit costs from this information. Explain.
Answer. In the given situation the shop premises is owned by the producer himself. Therefore the rent of the shop is the implicit cost as he would have earned rent if the shop was rented out. The money which the producer borrows from the market, its interest is the explicit cost. It is the actual money expenditure on an input. 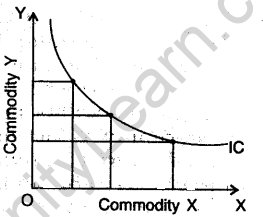 An indifference curve is convex to the origin. Convexity of the curve signifies that it bows inward to the origin. This is simply because MRS is declining continuously, due to the operation of the law of diminishing marginal ( utility. This becomes evident by looking at the diagram

Question.12. A consumer buys 10 units of a good at a price of Rs 9 per unit. At price of Rs 10 per unit he buys 9 units. What is price elasticity of demand? Use expenditure approach. Comment on the likely shape of demand curve on the basis of this measure of elasticity.
Answer.

In this case, according to the expenditure method, since the total expenditure is same, i.e., Rs 90, the elasticity of demand is = -1.
Since TE remains the same, the nature of demand curve will be rectangular hyperbola. 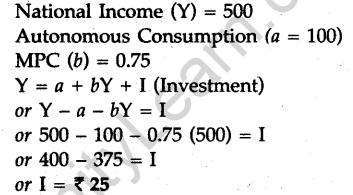 Question.27.Giving reason explain how should the following be treated in estimating National Income:
(i) Payment of bonus by a firm
(ii) Payment of interest on a loan taken by an employee from the employer .
Answer. (i) Bonus is included in the estimation of National Income because it is a part of compensation of employees.
(ii) Interest on loan taken by an employee is not included because the loan is taken for consumption purposes.

Question.30. Find out (a) Net National Product at Market Price and (b) Gross National Disposable Income:

Note: Except for the following questions, all the remaining questions have been asked in Set I and Set II.
SECTION A
Question.6. State reasons why does an economic problem arise?
Answer. Economic problems arise because of the following facts:
(i) Our wants are unlimited.
(ii) Resources to satisfy unlimited wants are limited.
(iii) Limited resources can be put to alternative uses. 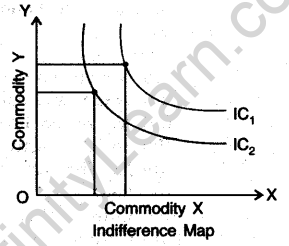 Question.12. A consumer buys 20 units of a good at a price of Rs 5 per unit. He incurs an expenditure of Rs 120 when he buys 24 units. Calculate price elasticity of demand using the percentage method. Comment upon the likely shape of demand curve based on this information.
Answer.

Question.27. Giving reason explain how should die following be heated in estimating National Income: (i) Interest paid by banks on deposits by individuals. (ii) National debt interest.
Answer. (i) Interest paid by Banks to individual is, included in the estimation of National Income because it is a factor payment by a producer.
(ii) National debt interest is not included because it is a transfer payment. This loan is taken for consumption purposes.

Question.30. Find out (a) Gross National Product aGMarket nice and (b) Net Current Transfers from Abroad: