Essay on Poverty in India

Poverty is defined as the lack of sufficient money to meet basic needs such as food and shelter. Poverty is a situation in which a person is homeless and has very little money. Due to the growing population in urban areas, India’s poverty rate is rising. The most important fact is that huge numbers of people live in poverty, with the majority living on the edge of it. Poverty in India is mostly observed in rural regions due to a large number of uneducated and unemployed people within the growing population.

Many people cannot afford proper food for their daily lives, and because they do not have their own homes, they sleep on streets or footpaths. As a result, more people require more food, money, and shelter, but poverty grows rapidly due to a lack of these resources. This is why the rich become richer and the poor become poorer, making it difficult to bridge the gap. Poverty has several consequences, including poor housing, illiteracy, increased child labor and unemployment, and poor hygiene. As a result, these poor individuals cannot afford a balanced diet, decent clothes, or a good education for the simple reason that they do not have enough money. 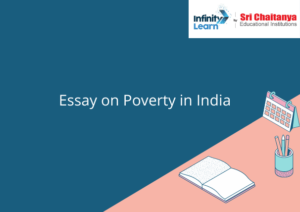 Poverty may be reduced by providing sufficient education and facilities to farmers, allowing them to become more profitable and not feel the need to migrate to cities in search of work. Also, uneducated individuals should receive a good education to improve their lives, and family planning is also necessary for getting out of poverty. Poverty in our country dates back to ancient times, when the poor were not given the same privileges as the wealthy, and they were even denied access to religious places. Unemployment, a lack of education, poor resource utilization, corruption, and poor government policy are all major causes of poverty.

In India, poverty is high when compared to other nations due to the poor growth rate of per capita income per person. Due to a lack of career prospects, many individuals work as rickshaw pullers, construction laborers, domestic servants, and other low-wage jobs, which leads them to live in slum areas.

In addition, lack of land resources has been one of the key reasons for poverty in India; even small farmers in our nation are poor since they cultivate but do not receive fair pay in terms of profit, resulting in poverty.

The population of India as a Major Cause of Poverty :

Since the beginning of time, poverty has been an unavoidable problem. Under British colonial authority, poverty in India worsened from the late 19th century through the early 20th century, peaking in the 1920s. During this time, the colonial government de-industrialized India by restricting the production of finished garments and other goods by Indian craftsmen.

From then till recent times, the situation has been quite the same or has even worsened in many places. In 2013, the Indian government reported that 21.9% of the country’s population lived below the official poverty line. In other words, India, which accounted for 17.5% of the world population, had 20.6% of the world’s poorest people in 2013. Rural areas are home to a huge number of poor people. Poverty is more severe among members of scheduled castes and tribes in the country’s rural areas.

India’s population has been rapidly increasing. In 1991, India’s population was around 84.3 crores, with a high rate of poverty; now, our country’s population is around 130 crores, with the population nearly doubling in the last three decades, but not enough has been done to control poverty in our country. As the population grows, so does unemployment, and poverty is just a reflection of unemployment. More capital is necessary for developing industry, providing adequate transportation, and other projects, as a result of which the country’s deficiency is underdeveloped and more people live in poverty. Lack of skilled labor also contributes to poverty since less-skilled workers lack industrial training and education and miss out on opportunities that more skilled workers can avail. Lack of infrastructure means that transportation and communication have not been properly developed, resulting in farmers receiving fertilisers for cultivation late and industries receiving power and raw materials not on time and thus, end products not being properly marketed and reaching customers on time. Hence, to escape poverty, our government must be more serious, and citizens must share equal responsibility.

Conclusion :
Remarkably, as a result of rural-to-urban migration, the incidence of rural poverty has fallen steadily. First and foremost, population growth should be strictly controlled to tackle the serious problem of poverty. Other approaches to fight this problem include expanding work possibilities, educating people, eliminating black money, decentralized planning, and assisting women and youth in becoming self-sufficient. Empowering the weaker and most backward sections of society is also expected to help reduce poverty. We are not failing to achieve our goals owing to a lack of resources or technical support, but rather due to a lack of execution of our plans and programs.