Question.2. Which port in India is the biggest with a spacious natural and well sheltered harbour?
Answer. Mumbai

Question.3. What is a pressure group? Give an example.
Answer. Pressure groups are organizations that attempt to influence government policies. They could do so by forming an organization and undertaking activities to promote their interest or their viewpoint. These organizations are formed when people with common occupation, interest, aspirations or opinions come together in order to achieve a common objective.
A few examples are: BAMCEF (Backward and Minorities Community Employees’ Federation), FEDECOR—a Bolivian organization, RWAs, AITUC.

Question.5. Give two dissimilarities of popular struggles in Nepal and Bolivia?
Answer.

Question.8.Mention two ways in which consumer ignorance can cause their exploitation?
Answer.

Question.10.How was Rowlatt Act opposed by the people in India? Explain with examples.
Answer. Gandhiji, who had formed a Satyagraha Sabha earlier, called for a countrywide protest against the proposed Rowlatt Act. Throughout the country, 6 April 1919 was observed as a National Humiliation Day. Gandhiji wanted a non-violent civil disobedience against such unjust laws. Hartals (Strikes) and rallies were organized in various cities. Workers went on strike in railway workshops. Shops closed down. The movement was non-violent but proved to be effective.

Question.11.Explain the process of unification of Italy.
Answer. Italy too had a long history of political fragmentation. Italians were scattered over dynastic states and the multinationals Hamsburg Empire. Italy was divided into seven states. Italian language did not have one common form.
Guiseppe Mazzini had played an important role in the unification of Italy. He formed a secret society called ‘Young Italy’ in Marseilles, to spread his goals. He believed Italy could not continue to be a patchwork of small states and had to be forged into a single unified republic. During 1830s, Mazzini sought to put together a coherent programme for a unitary Italian Republic. As uprisings in 1831 and 1848 had failed, the mantle now fell on Sardinia-Piedmon t under its ruler Emmanuel II to unify Italy.
Under Chief Minister Cavour, Sardinia-Piedmont succeeded in defeating the Austrian forces in 1859. Even Garibaldi joined the fray. In 1860, they marched towards South Italy and the Kingdom of the two Sicilies, and with the help of the local peasants, drove out the Spanish rulers. In 1861, Victor Emmanuel II was proclaimed as King of United Italy.
Or
Explain any three steps taken by the French to develop cultivation in the Mekong Delta.
Answer.

Question.12. Differentiate between metallic and non-metallic minerals with examples.
Answer. 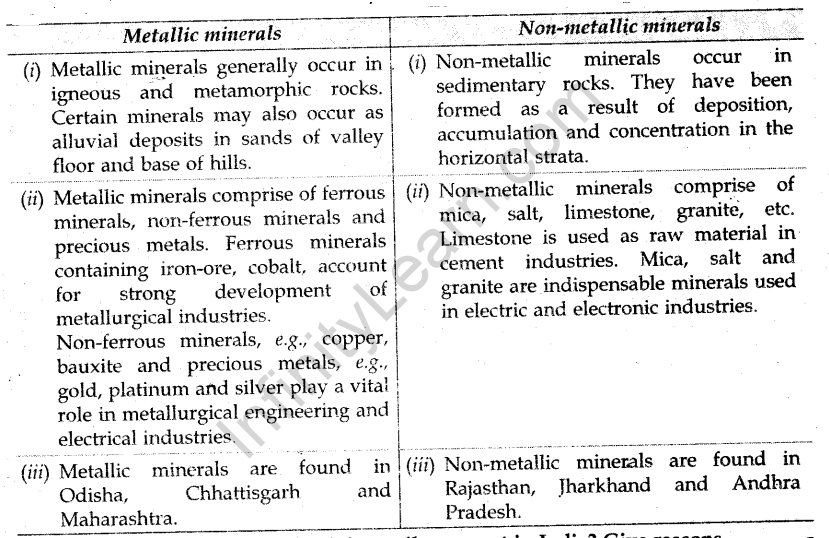 Question.13. Why is road transport more useful than rail transport in India? Give reasons.
Answer.Reasons:

Question.18. How do Multinational Companies manage to keep the cost of production of their goods low? Explain with examples.
Answer.

Question.19. How is money used as a medium of exchange? Explain with examples.
Answer. Money as a medium of exchange is used in the sale and purchase of goods and sendees. Anyone can get commodities in the exchange of money. Money removed the problem of barter system. Money offers freedom of choice and its owner can use it at the article, place, time and the way he likes.

Or
How were Vietnamese nationalists inspired by Japan and China to set up a democratic republic? Explain with examples.
Answer. Influence of Japan. In 1907-08, around 300 students from Vietnam went to Japan to acquire modem education.

Question.22. “Dalit participation was limited in the Civil Disobedience Movement”. Examine the statement.
Answer. The abstract concept of ‘Swaraj’ did not move the nation’s ‘untouchables’, who from around the 1930s had begun to call themselves dalit or oppressed.
The Congress had ignored the dalits, for the fear of offending the Sanatanis, the conservative high caste Hindus.
Gandhiji persuaded upper castes to change their heart. He himself cleaned toilets to dignify the work of the bhangi. He called the untouchables, Harijans, organized satyagraha to secure them entry into temples and access to public wells, tanks and schools.
The dalit leaders were keen on a different political solution. Political empowerment, they believed would resolve the problems of their social disability. They began demanding reserved seats in educational institutions and a separate electorate that would choose dalit members for the Legislative Council.

Question.25. “Democracy is seen to be good in principle but felt to be not so good in practice.”
Justify the statement.
Answer. If we look at some of the democratic policies being implemented in more than one hundred countries of the world, democracy seems to be good. For example, having a formal Constitution, holding regular elections, guaranteeing the citizens certain rights, working for the welfare of the people etc. make us advocate that democracy is good.
But if we look in terms of social situations, their economic achievements and varied cultures, we find a very big difference in most of the democracies. The vast economic disparities, social injustice based on discrimination, standard of life, sex discrimination, etc. create many doubts about the merits of democracy.
Whenever some of our expectations are not met, we start blaming the idea of democracy. Since democracy is a form of government, it can only create conditions for achieving our goals if they are reasonable.

Question.26. How far has India succeeded in overcoming the challenge of expansion before its democracy? Evaluate.
Answer. Like most , of the established democracies of the world, India, too, faces the challenges of expansion.

Once these loans are repaid, another round of loans is offered: 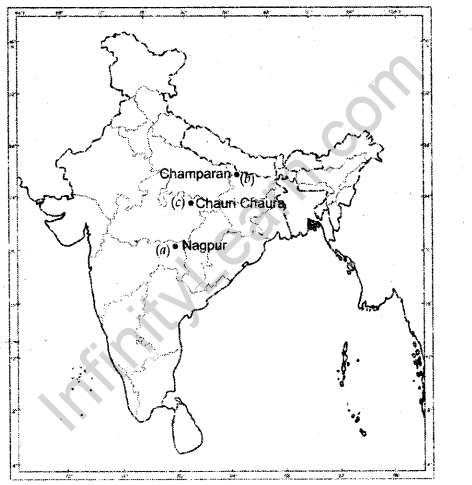 Question.30. On the given political outline map of India:
(a) Identify
A. Nuclear Power Plant
B. Major Sea Port
(b) Locate and label
(i) Bhadrawati—Iron and Steel Plant 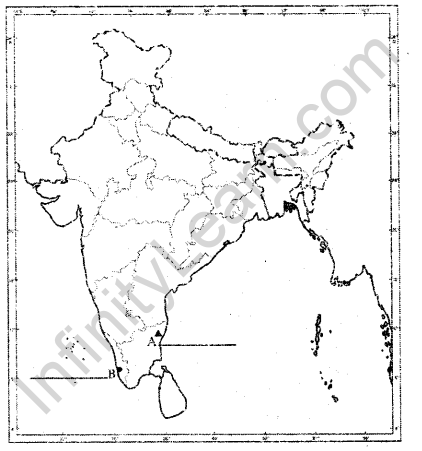 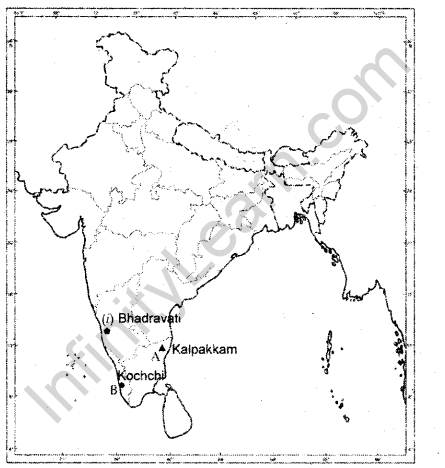 Note: The following questions are for the BLIND CANDIDATES only, in lieu of Question No. 30.
(1) Name the nuclear plant located in Uttar Pradesh.
(2) Name the iron and steel plant located in Chhattisgarh.
(3) Which is the southernmost sea port of India?
Answer. (1) Narora (2) Bhilai (3) Tuticorin

Except for the following questions, all the remaining questions have been asked in Set-I.
Question.11. Explain the process of unification of Germany.
Answer. Unification of Germany:
In the 18th century, Germany was divided into a number of states. Some of these states ceased to exist during the Napoleonic wars. At the end of the war, there were still 39 independent states in Germany. Prussia was most powerful, dominated by big landlords known as Junkers.

Question.19. What are the modern forms of money? Why is the ‘rupee’ widely accepted as a medium of exchange? Explain two reasons.
Answer. Modem forms of money currency in India include paper notes and coins which are known as Rupees and Paise.

Question.22. “Some of the Muslim political organizations in India, were lukewarm in their response to the ‘Civil Disobedient Movement’.” Examine the statement.
Answer. Muslim response was lukewarm to the Civil Disobedience Movement as a large section of Muslims felt alienated from the Congress.

Except for the following questions, all the remaining questions have been asked in Set-I and Set-II
Question.11. How has Britain come into existence? Explain.
Answer. In Britain, the formation of the nation state was the consequence of a long drawn out process. There was no British nation before the 18th century. The people who inhabited British Isles were of ethnic groups like English, Irish, Scot or Welsh. In 1688, English Parliament wrested control from the monarchy. The Act of Union (1707) between England and Scotland led to creation of ‘United Kingdom of Great Britain’. The English now dominated Scotland’s culture and its political institutions. The Catholic people of Scottish Highlands were forbidden to speak their Gaelic language and a large number of them were forced out of their homelands. .
Ireland met the same fate, the English supported the Protestants of Ireland and increased their domination over this largely Catholic nation. In 1801, Ireland was forcibly incorporated into the United Kingdom. A new ‘British nation’ with symbols like British flag (Union Jack), National Anthem (God Save Our Noble King) and the English language became the forbearer of English culture and the older nations became subservient partners in this Union.
Or
Explain the views of Phan Chu Trinh as a nationalist.
Answer. Phan Chu Trinh was intensely hostile to the monarchy. He wished to overthrow the monarchy and create a democratic Republic for Vietnam.

Question.12..Differentiate between conventional and non-conventional sources of energy with examples.
Answer.

Question.19. What is collateral? Why do lenders ask for collateral while lending? Explain.
Answer. Collateral is an asset that the borrower owns (land, building, vehicle, livestock, land documents, deposits with banks etc.) which stands as a security against the money borrowed. In case the borrower fails to repay the loan, the lender has the right to sell the asset or collateral to recover the loan money. Most lenders ask for collateral while lending as a security against their own funds.

Question.22. “Nationalism spreads when people begin to believe that they are all part of the same nation.” Justify the statement.
Answer. History and fiction, folklore and songs, popular prints and symbols —all played an important role in creating a sense of collective belonging leading to the growth of nationalism.
Image of Bharat Mata:

Water pollution caused by industries can be controlled by: