• Chemical Bond
The force that holds different atoms in a molecule is called chemical bond.
• Octet Rule
Atoms of different elements take part in chemical combination in order to complete their octet or to attain the noble gas configuration.
• Valence Electrons
It is the outermost shell electron which takes part in chemical combination.
• Facts Stated by Kossel in Relation to Chemical Bonding
— In the periodic table, the highly electronegative halogens and the highly electro-positive alkali metals are separated by noble gases.
— Formation of an anion and cation by the halogens and alkali metals are formed by gain of electron and loss of electron respectively.
— Both the negative and positive ions acquire the noble gas configuration.
— The negative and positive ions are stabilized by electrostatic attraction Example,

(iii) Lattice energy or enthalpy: It is defined as the amount of energy required to separate 1 mole of ionic compound into separate oppositely charged ions.
Lattice energy of an ionic compound depends upon following factors:
(i) Size of the ions: Smaller the size, greater will be the lattice energy.
(ii) Charge on the ions: Greater the magnitude of charge, greater the interionic attraction and hence higher the lattice energy.
• General Characteristics of ionic Compounds
(i) Physical’State: They generally exist as crystalline solids, known as crystal lattice. Ionic compounds do not exist as single molecules like other gaseous molecules e.g., H2 , N2 , 02 , Cl2 etc.
(ii) Melting and boiling points: Since ionic compounds contain high interionic force between them, they generally have high melting and boiling points.
(iii) Solubility: They are soluble in polar solvents such as water but do not dissolve in organic solvents like benzene, CCl4etc.
(iv) Electrical conductivity: In solid state they are poor conductors of electricity but in molten state or when dissolved in water, they conduct electricity.
(v) Ionic reactions: Ionic compounds produce ions in the solution which gives very fast reaction with oppositely charged ions.
For example,

• Covalent Bond—Lewis-Langmuir Concept
When the bond is formed between two or more atoms by mutual contribution and sharing of electrons, it is known as covalent bond.
If the combining atoms are same the covalent molecule is known as homoatomic. If they are different, they are known as heteroatomic molecule.
For Example, 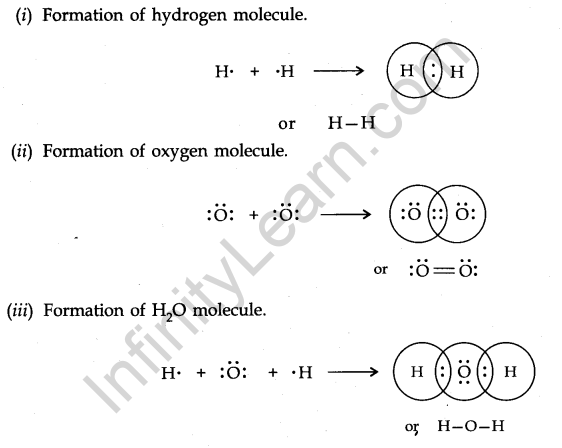 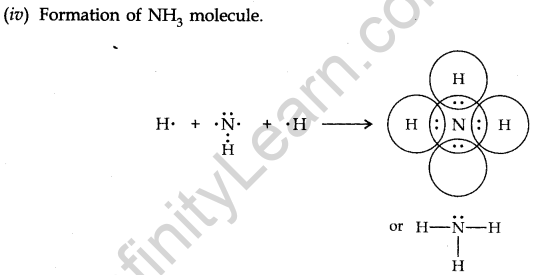 • Lewis Representation of Simple Molecules (the Lewis Structures)
The Lewis dot Structure can be written through the following steps:
(i) Calculate the total number of valence electrons of the combining atoms.
(ii) Each anion means addition of one electron and each cation means removal of one electron. This gives the total number of electrons to be distributed.
(iii) By knowing the chemical symbols of the combining atoms.
(iv) After placing shared pairs of electrons for single bond, the remaining electrons may account for either multiple bonds or as lone pairs. It is to be noted that octet of each atom should be completed.

• Formal Charge
In polyatomic ions, the net charge is the charge on the ion as a whole and not by particular atom. However, charges can be assigned to individual atoms or ions. These are called formal charges.
It can be expressed as 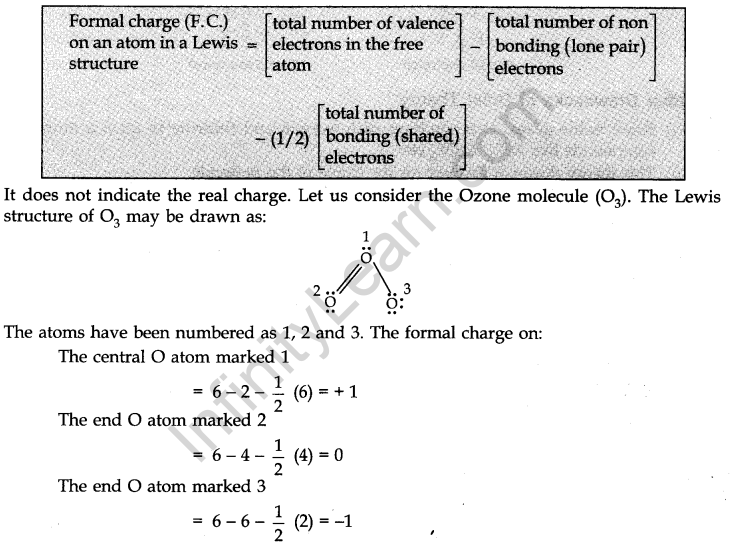 Li, Be and B have 1, 2, and 3 valence electrons only.
(ii) Odd-electron molecules: There are certain molecules which have odd number of electrons the octet rule is not applied for all the atoms.

(iii) The expanded Octet: In many compounds there are more than eight valence electrons around the central atom. It is termed as expanded octet. For Example,

• Other Drawbacks of Octet Theory
(i) Some noble gases, also combine with oxygen and fluorine to form a number of compounds like XeF2 , XeOF2 etc.
(ii) This theory does not account for the shape of the molecule.
(iii) It does not give any idea about the energy of The molecule and relative stability.
• Bond Length
It is defined as the equilibrium distance between the centres of the nuclei of the two bonded atoms. It is expressed in terms of A. Experimentally, it can be defined by X-ray diffraction or electron diffraction method. 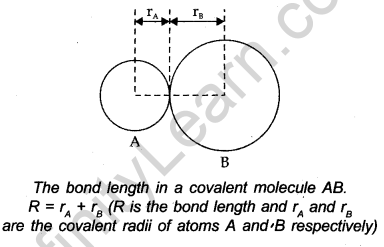 • Resonance Structures
There are many molecules whose behaviour cannot be explained by a single-Lew is structure, Tor example, Lewis structure of Ozone represented as follows: 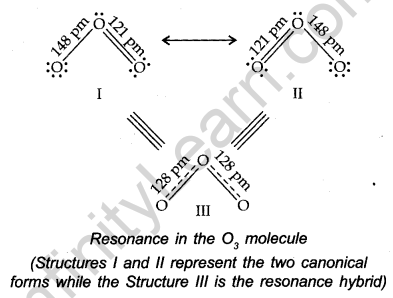 • Polarity of Bonds
Polar and Non-Polar Covalent bonds
Non-Polar Covalent bonds: When the atoms joined by covalent bond are the same like; H2, 02, Cl2, the shared pair of electrons is equally attracted by two atoms and thus the shared electron pair is equidistant to both of them.
Alternatively, we can say that it lies exactly in the centre of the bonding atoms. As a result, no poles are developed and the bond is called as non-polar covalent bond. The corresponding molecules are known as non-polar molecules.
For Example,

• Dipole Moment
Due to polarity, polar molecules are also known as dipole molecules and they possess dipole moment. Dipole moment is defined as the product of magnitude of the positive or negative charge and the distance between the charges.

• Applications of Dipole Moment
(i) For determining the polarity of the molecules.
(ii) In finding the shapes of the molecules.
For example, the molecules with zero dipole moment will be linear or symmetrical. Those molecules which have unsymmetrical shapes will be either bent or angular.
(e.g., NH3with μ = 1.47 D).
(iii) In calculating the percentage ionic character of polar bonds.
• The Valence Shell Electron Pair Repulsion (VSEPR) Theory
Sidgwick and Powell in 1940, proposed a simple theory based on repulsive character of electron pairs in the valence shell of the atoms. It was further developed by Nyholm and Gillespie (1957).
Main Postulates are the following:
(i) The exact shape of molecule depends upon the number of electron pairs (bonded or non bonded) around the central atoms.
(ii) The electron pairs have a tendency to repel each other since they exist around the central atom and the electron clouds are negatively charged.
(iii) Electron pairs try to take such position which can minimize the rupulsion between them.
(iv) The valence shell is taken as a sphere with the electron pairs placed at maximum distance.
(v) A multiple bond is treated as if it is a single electron pair and the electron pairs which constitute the bond as single pairs.
• Valence Bond Theory
Valence bond theory was introduced by Heitler and London (1927) and developed by Pauling and others. It is based on the concept of atomic orbitals and the electronic configuration of the atoms.
Let us consider the formation of hydrogen molecule based on valence-bond theory.
Let two hydrogen atoms A and B having their nuclei NA and NB and electrons present in them are eA and eB .
As these two atoms come closer new attractive and repulsive forces begin to operate.
(i) The nucleus of one atom is attracted towards its own electron and the electron of the other and vice versa.
(ii) Repulsive forces arise between the electrons of two atoms and nuclei of two atoms. Attractive forces tend to bring the two atoms closer whereas repulsive forces tend to push them apart.
• Orbital Overlap Concept
According to orbital overlap concept, covalent bond formed between atoms results in the overlap of orbitals belonging to the atoms having opposite spins of electrons. Formation of hydrogen molecule as a result of overlap of the two atomic orbitals of hydrogen atoms is shown in the figures that follows:

Stability of a Molecular orbital depends upon the extent of the overlap of the atomic orbitals.
• Types of Orbital Overlap
Depending upon the type of overlapping, the covalent bonds are of two types, known as sigma (σ ) and pi (π) bonds.
(i) Sigma (σ bond): Sigma bond is formed by the end to end (head-on) overlap of bonding orbitals along the internuclear axis.
The axial overlap involving these orbitals is of three types:
• s-s overlapping: In this case, there is overlap of two half-filled s-orbitals along the internuclear axis as shown below:

• p-p overlapping: This type of overlapping takes place between half filled p-orbitals of the two approaching atoms.

(ii) pi (π bond): π bond is formed by the atomic orbitals when they overlap in such a way that their axes remain parallel to each other and perpendicular to the internuclear axis.The orbital formed is due to lateral overlapping or side wise overlapping. 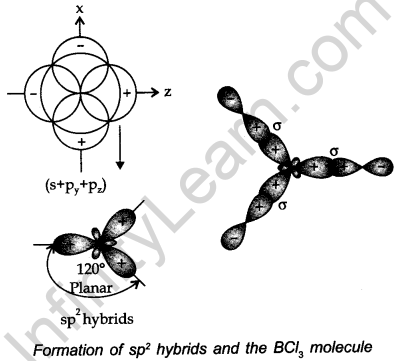 (iii) sp3 hybridisation: In this type, one s and three p-orbitals in the valence shell of an atom get hybridised to form four equivalent hybrid orbitals. There is 25% s-character and 75% p-character in each sp3 hybrid orbital. The four sp3 orbitals are directed towards four corners of the tetrahedron.

The angle between sp3 hybrid orbitals is 109.5°.
A compound in which sp3 hybridisation occurs is, (CH4). The structures of NH2 and H20 molecules can also be explained with the help of sp3 hybridisation.
• Formation of Molecular Orbitals: Linear Combination of Atomic Orbitals (LCAO)
The formation of molecular orbitals can be explained by the linear combination of atomic orbitals. Combination takes place either by addition or by subtraction of wave function as shown below. 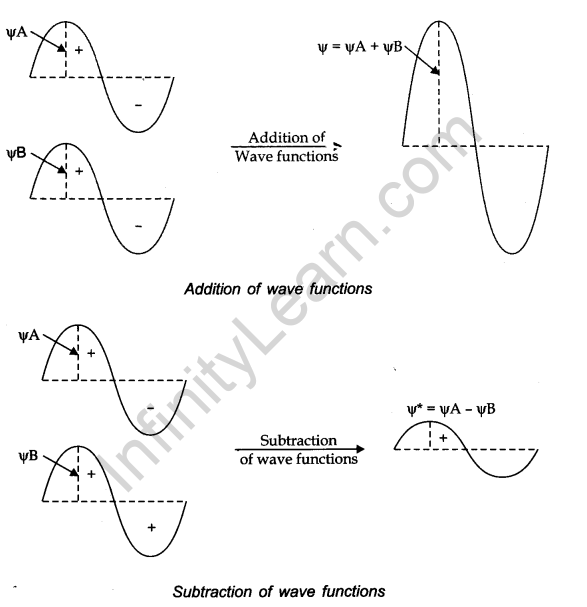 • Bond Order
Bond order is defined as half of the difference between the number of electrons present in bonding and antibonding molecular orbitals.
Bond order (B.O.) = 1/2 [Nb-Na] The bond order may be a whole number, a fraction or even zero.
It may also be positive or negative.
Nature of the bond: Integral bond order value for single double and triple bond will be 1, 2 and 3 respectively.
Bond-Length: Bond order is inversely proportional to bond-length. Thus, greater the bond order, smaller will be the bond-length.
Magnetic Nature: If all the molecular orbitals have paired electrons, the substance is diamagnetic. If one or more molecular orbitals have unpaired electrons, it is paramagnetic e.g., 02 molecule.
• Bonding in Some Homonuclear (Diatomic) Molecules
(1) Hydrogen molecule (H2): It is formed by the combination of two hydrogen atoms. Each hydrogen atom has one electron in Is orbital, so, the electronic configuration of hydrogen molecule is

This indicates that two hydrogen atoms are bonded by a single covalent bond. Bond dissociation energy of hydrogen has been found = 438 kJ/mole. Bond-Length = 74 pm
No unpaired electron is present therefore,, it is diamagnetic.
(2) Helium molecule (He2): Each helium atom contains 2 electrons, thus in He2 molecule there would be 4 electrons.
The electrons will be accommodated in σ1s and σ*1s molecular orbitals: 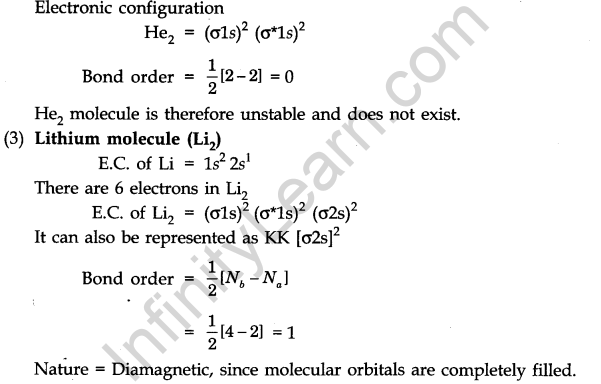