Thus, there is a cause and effect relationship between human capital formation and economic growth.

Education as an Essential Element of Human Resource Development
It implies the process of teaching training and learning especially in schools or colleges, to improve knowledge and develop skills.

Education Still a Challenging Proposition
Education system of the country which along with the following facts makes education still challenging proposition in India.

Right to Education (RTE)
In the year 2012, the Government of India has brought about an Act, called RTE. It promises education to all. It makes education a matter of right to all children in the age group of 6-14 years. 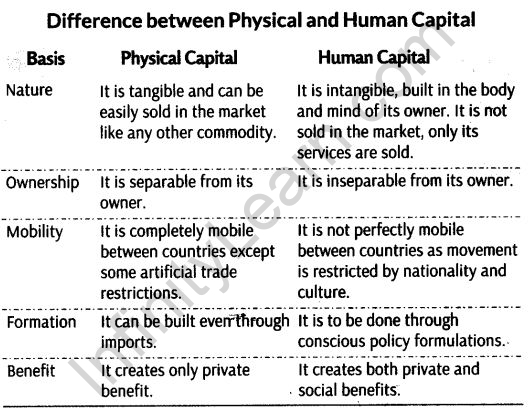 2. Expenditure on Health
Health is another important source of human capital formation. A sick labourer without access to medical facilities is compelled to abstain from work and there in a loss of productivity. The various forms of health expenditure are preventive medicine, curative medicine, social medicine, provision of clean drinking water, etc.

3. On-the-job Training
Expenditure regarding on-the-job training is a source of human capital formation as the return of such expenditure in the form of enhanced labour productivity is more than the cost of it.

Firms spend huge amounts on giving on-the-job training to their workers. It may be in different forms like a worker may be trained in the firm itself or under the supervision of a skilled worker or can be sent for off campus training.
The firms then insist that workers should work for atleast some time in die company so that they can recover the benefits of the enhanced productivity owing to the training.

4. Migration
People sometimes migrate from one place to the other in search of better jobs that fetch them higher salaries than what they may get in their native places. It includes migration of people from rural areas to urban areas in India. Unemployment is the reason for the rural urban migration in India and technically qualified people migrate from one country to another in order to get high salaries.

Economic Growth and State of Human Capita! Formation in Intiter
Human Capital and Economic Growth
India recognised the importance of human capital in economic growth long ago. The Seventh Five Year Plan says, ‘Human resources development has necessarily to be assigned a key role in any development strategy, particularly in a country with a large population’.
The following points show clearly the interdependence among the two

India as a Knowledge Economy
The Indian software industry has been showing an Impressive record over the past decade. Entrepreneurs, bureaucrats and politicians are now advancing views about how India can transform itself into a knowledge-based economy by using Information Technology (IT).

There have been some instances of villagers using e-mail which are cited as examples of such transformation. Likewise, e-governance is being projected as the way of the future.
The value of IT depends greatly on the existing level of economic development.

Human Capital and Human Development
Human development is the broader term than human capital.
Human capital considers education and health as a means to increase labour productivity. Human development is based on the idea that education and health are integral to human well-being because when people have the ability to read and write and the ability to lead a long and healthy life, they will be able to make other choices they value.

In human capital view, any investment in education and health is unproductive, if it-does not enhance output of goods and services. In the human development perspective, human beings are ends in themselves. Therefore, basic education and basic health are important in themselves, irrespective of their contribution to labour productivity. Deutsche Bank and World Bank Report on Indian Economy.

Education Sector in India
Education implies the process of teaching, training and learning especially in schools or colleges, to improve knowledge and develop skills.
Following points explain the important or objective of education

As we expand school education, we need more teachers who are trained in the higher educational institutions, therefore, expenditure on all levels of education should be increased. The per capita education expenditure is as high as Rs. 2005 in Himachal Pradesh to as low as Rs. 515 in Bihar.
This leads to differences in educational opportunities across states.

Free and Compulsory Education
The Education Commission (1964-66) had recommended that atleast 6% of GDP to be spent on education so as to make a noticeable rate of growth in education.

In December 2002, the Government of India, through the 86th Amendment of the Constitution of India, made free and compulsory education a fundamental right of all children in the age group of 6-14 years. Government of India in year 1998 appointed. The Tapas Majumdar Committee, which estimated an expenditure of around 1.37 lakh crore over 10 years (1998-99 to 2006-07) to bring all Indian children in the age group of 6-14 years, under the purview of school education. Desired level of expenditure an education is 6% of GDP but the current level is little over 4% which is not inadequate. It is necessary to reach the level of 6% which is considered as must for coming years.

Future Prospects
India government considers education a key sector where considerable growth and.development is required. Thus, it has set some future prospects for framing its policies.
These prospects are discussed below
Education for All : Still a Distant Dream
Although the education level in India has risen for both adults as well as for youth. Still the number of illiterates in India are as much as the population was at the time of Independence.

In 1950, when the Constitution of India was passed by the constituent assembly, it was noted in the directive principles of the constitution that the government should provide free and compulsory education for all children up to the age of 14 years within 10 years from the commencement of the constitution.
The following factors makes education still a distant dream

Gender Equity : Better than Before
The differences in literacy rates between males and females are narrowing, signifying a positive development in gender equity; still the need to promote education for women in India is imminent for various reasons, such as

Therefore, we cannot show the satisfaction about the upward movement in literacy rates as we have miles to go in achieving cent percent adult literacy.

In India, Mizoram, Kerala, Goa and Delhi are the states having high literacy rate, while Bihar, Uttar Pradesh, Rajasthan and Arunachal Pradesh are the educationally backward states. The educational backwardness is due to social and economic poverty of the people.
Higher Education : A Few Takers

Therefore, the government should increase allocation for higher education and also improve the standard of higher education institutes, so that students are imparted employable skills in such institutions