Health, Common Diseases in Human and Immunity:
1. Health is defined as a state of complete physical, mental and social well-being.
(i) The factors which affect human health are:
(a) Genetic disorders (b) Infections (c) Lifestyle.
(ii) Balanced diet, personal hygiene and regular exercise are very important to maintain good health.
(Hi) Awareness about diseases and their effect on different body functions, vaccination against infectious diseases, proper disposal of wastes, control of vectors, maintenance of hygienic food and water resources are necessary for achieving good health.
2. Disease is a state when functioning of one or more organs or systems of the body is
adversely affected, characterised by various signs and symptoms.
Diseases can be divided broadly into the following two categories depending on the
modes of transmission
I. Infectious diseases which easily transmit from one person to another, e.g. AIDS, common cold, etc.
II. Non-infectious diseases which does not transmit from one person to another, e.g. cancer, diabetes, etc.
(i) Disease causing organisms are called pathogens, e.g. bacteria, viruses, fungi, protozoans, helminthes, etc.
(ii) The above described pathogens enter the body by direct contact, contaminated food and water, droplet infection, etc.
(iii)The pathogens multiply in body cells, interfere with normal vital activities, cause morphological and functional damage.
(iv) Infectious diseases can be divided into certain categories, based on the type of pathogen
Infectious Diseases
Bacterial Viral Protozoan Fungal Helminthic
e.g. pneumonia, e.g. common cold, e.g. amoebiasis, e.g. ringworm, e.g. ascariasis, ,
plague, typhoid, polio, etc. malaria, etc. athelete’s foot, etc. filariasis, taeniasis, etc.
diphtheria, etc

Some diseases are transmitted by vector, i.e. mosquitoes like dengue (Aedes aegypti); chikungunya (Aedes aegypti, Aedes albopictus) and malaria (.Anopheles).
3. Some of the common infectious diseases are:
I. Bacterial Diseases
(i) Typhoid is caused by bacterium (Salmonella typhi).
(a) S. typhi enters the small intestine through food and water contaminated with them and migrate to other organs through blood.
(b) Intestinal perforation and death may occur in severe cases.
(c) Widal test is a confirmation test for typhoid.
(d) Symptoms are high fever (39-40°C), weakness, stomach pain, constipation, headache and loss of appetite.
(ii) Pneumonia is caused byStreptococcus pneumoniae and Haemophilus influenzae.
(a) These bacteria infect alveoli of the lungs. The alveoli get filled with fluid causing decrease in respiratory efficiency of the lungs.
(b) Pneumonia spreads by inhaling droplets/aerosol from infected individuals or even by sharing glasses and utensils with patients.
(c) Symptoms of pneumonia are fever, chills, cough, headache, etc.
(iii) Dysentery, plague, diphtheria, etc., are some other examples of bacterial diseases.
II. Viral Disease
Common cold occurs due to a group of viruses called rhino viruses.
(a) These viruses infect the nose and respiratory passage but not the lungs.
(b) Common cold is characterised by nasal congestion and discharge, sore throat, hoarseness, cough, headache, tiredness, etc., which generally last for 3-7 days.
(c) The infection occurs due to cough or sneezes of an infected person, either inhaled directly or transmitted through contaminated objects such as pens, books, cups, computer’s keyboard or mouse, etc.
III. Protozoan Diseases
(i) Malaria is caused by a protozoan, Plasmodium sp. (P. vivax, P. malariae and P. falciparum).
(a) P. falciparum causes most serious kind of malaria, i.e. malignant malaria which can be fatal.
(b) Female Anopheles mosquito is the vector of Plasmodium, which transfer the sporozoites (infectious form) in human body.
(c) Life cycle of Plasmodium is given in the figure. 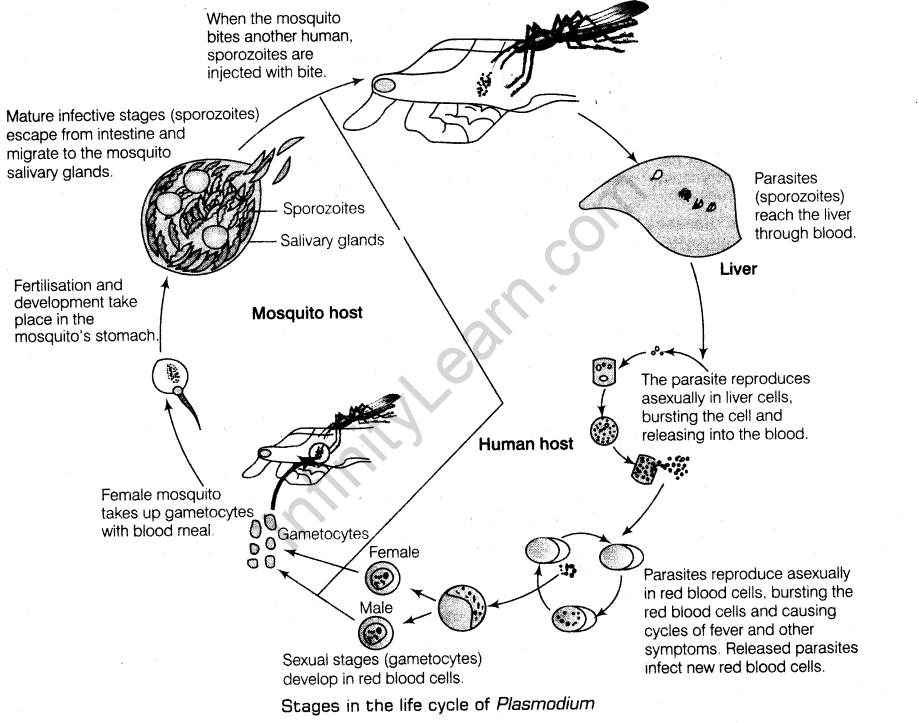 • The malarial parasite requires two hosts to complete its life cycle, i.e. human and mosquito.
• Plasmodium enters the human body as sporozoite, through the bite of infected female Anopheles mosquito.
• Parasites initially multiply within the liver cells and then attack the Red Blood Cells (RBCs) causing their rupture.
• Rupture of RBCs release a toxic substance called haemozoin. Haemozoin causes chill and high fever recurring every 3-4 days.
• When a female Anopheles mosquito bites an infected person, these parasites enter the mosquito’s body and undergo further development.
• The parasites multiply within them to form sporozoites that are stored in their salivary glands.
• When these mosquitoes bite a human, the sporozoites are introduced into his/her body, initiating the events mentioned above.
(d) Antimalarial drugs used for the treatment are quinine and chloroquin.
(e) Malaria can be prevented by killing mosquitoes by spraying DDT, BHC, etc., and using insect repellents, mosquito nets, etc.
(ii) Amoebiasis (amoebic dysentery) is caused by an intestinal endoparasite, Entamoeba histolytica, which is found in large intestine of humans.
(a) Carrier of pathogen is housefly. It transmits the parasite from faeces of infected person to the food, thereby contaminating them.
(b) Infection takes place mainly through the contaminated food and water.
(c) Symptoms are abdominal pain, constipation, cramps, faeces with excess mucous and blood clots.
IV. Fungal Disease
Ringworm is caused by many fungi of genera Microsporum, Trichophyton and Epidermophyton.
(i) Infection occurs through contact with an infected person or from soil and through the use of towels, clothes, combs, etc., of an infected person.
(ii) Heat and moisture help these fungi to grow in regions like skin folds as in groin or between the toes.
(Hi) Symptoms of ringworm are appearance of dry, scaly lesions on various parts of the body such as skin, nails and scalp accompanied by intense itching.
V. Helminthic Diseases
(i) Ascariasis is caused by an intestinal endoparasite of human, Ascaris lumbricoides commonly called as roundworm.
(a) Infection occurs as the eggs of parasite are excreted along with the faeces of infected person, which contaminate water, soil, plants, etc.
(b) Infection reaches to human beings through contaminated vegetables, fruits and water, etc.
(c) Symptoms of disease are abdominal pain, indigestion, muscular pain, fever, anaemia, nausea, headache and blockage of intestinal passage.
(ii) Filariasis/Elephantiasis is caused by filarial worms, Wuchereria bancrofti and Wuchereria malayi.
(a) Culex mosquito (female) is the vector.
(b) Genital organs also get affected leading to their deformation.
(c) Symptoms are inflammation of organs in which they live for many years, normally affect lymph vessels of lower limbs resulting in swelling hence, called elephantiasis.
4. Prevention measures to avoid infectious diseases are:
(i) Maintenance of personal and public hygiene is important.
(ii) Personal hygiene includes keeping the body clean, consumption of clean drinking water, food, vegetables, fruits, etc.
(iii) Public hygiene includes proper disposal of waste excreta, periodic cleaning and disinfection of water reservoirs, pools, cesspools and tanks.
(iv) Eradication of vectors and destroying their breeding sites.
(v) Mosquito nets, repellants should be used.
(vi) Vaccination and immunisation programmes for diseases should be strictly followed.
(vii) Use of antibiotics and other drugs can significantly keep away infectious diseases.
5. Immunity is the capacity of an organism to resist or defend itself from the development of a disease. It is of the following types, as shown below:

I. Innate immunity is present from birth and is inherited from the parents.
(i) It is non-specific.
(ii) It consists as following types:
(a) Physical barriers prevent entry of microorganisms in the body e.g. skin, mucus coating of the epithelium lining the respiratory, gastrointestinal and urogenital tracts.
(b) Physiological barriers prevent microbial growth in the body, e.g. acid in the stomach, saliva in the mouth and tears from eyes.
(c) Cellular barriers phagocytose and destroy microbes. For example, some WBCs like Polymorphonuclear Leukocytes (PMNL), monocytes and natural killer cells (type of lymphocytes) in the blood as well as macrophages in tissues.
(d) Cytokine barriers are virus-infected cells, which secrete proteins called interferons. They protect non-infeeted cells from further viral infection.
II. Acquired immunity is not present from birth and develops during an individual’s life
time.
(i) It is pathogen specific and characterised by memory.
(ii) When it encounters a pathogen for the first time, it produces a response called
primaiy response, which is of low intensity.
(iii) Further encounter with same pathogen produces highly intensified secondary or
anamnestic response due to memory of the first encounter.
(iv) Immune responses are produced by two types of lymphocytes:
(a) B-lymphocytes or B-cells produce an army of proteins (in response to pathogens) called antibodies in blood.
(b) T-lymphocytes or T-cells help B-cells to produce antibodies.
(v) Types of acquired immunity:
(a) Humoral immune response or Antibody Mediated Immunity (AMI) It is mediated by antibodies present in blood and lymph.
(b) Cell-mediated immune response or Cell Mediated Immunity (CMI) It is mediated by T-lymphocytes. The graft rejection during organ transplantation, because of the ability to differentiate between self and non-self, is due to the cell-mediated immunity.
(vi) Antibodies are immunoglobulin molecules (Ig). These are of five types: 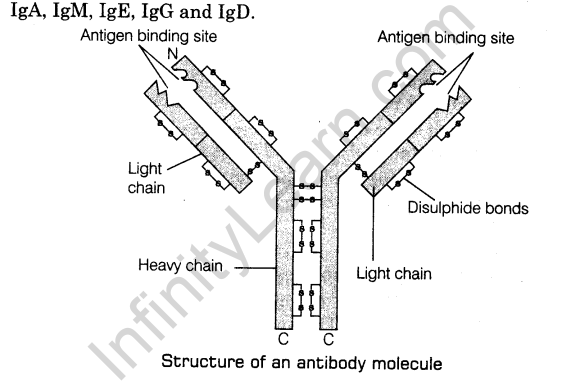