1. All elements consists of very small invisible particles, called atom. Every atom is a sphere of radius of the order of 10-10 m, in which entire mass is uniformly distributed and negative charged electrons revolve around the nucleus.
2. Experimental arrangement for α-scattering experiment and trajectory followed by α -particles 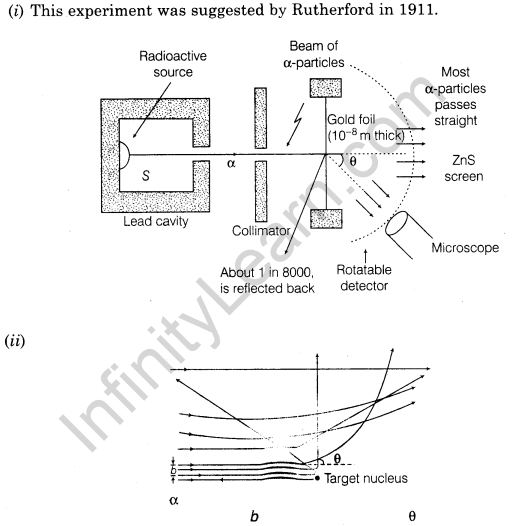 3. Impact parameter perpendicular distance of the velocity vector of a-particle from the central line of the nucleus of the atom is called impact parameter (b).

where, K is KE of α-particle, θ is scattering angle, Z is atomic number of the nucleus and e is charge of nucleus.
4. Basic assumption of Rutherford’s atomic model
(i) Atom consists of small central core, called atomic nucleus in which whole mass and positive charge is assumed to be concentrated.
(ii) The size of nucleus is much smaller than the size of the atom.
(iii) The nucleus is surrounded by electrons and atom is electrically neutral.
(iv) Electrons revolves around the nucleus and centripetal force is of eletrostatic nature.
5. Distance of Closest Approach At a certain distance r0 from the nucleus, whole of the KE of α-particle converts into electrostatic potential energy and α-particle cannot go farther close to nucleus, this distance (r0) is called distance of closest approach.

6. Angle of Scattering Angle by which a-particle gets deviated from its original path around the nucleus is called angle of scattering.
7. Drawbacks of Rutherford’s Model
(i) Could not explained stability of atom clearly.
(ii) Unable to explain line spectrum.
8. Bohr’s Theory of Hydrogen Atom Bohr combined classical and early quantum concepts and gave his theory in the form of three postulates. These are
(i) Bohr’s first postulate was that an electron in an atom could revolve in certain stable orbits without the emission of radiant energy, contrary to the predictions of electromagnetic theory.
(ii) Bohr’s second postulate defines these stable orbits. This postulate states that the electron revolves around the nucleus only in those orbits for which the angular momentum is some integral multiple of h/2π, where h is the Planck’s constant (= 6.6 x 10-34 J – s). Thus, the angular momentum (L) of the orbiting electron is
quantised, i. e. L = nh/2π
As, angular momentum of electron (L) = mvr
∴ For any permitted (stationary) orbit, mvr = nh/2π
where, n = any positive integer i.e. 1, 2, 3, ….
It is also called principal quantum number.
(iii) Bohr’s third postulate states that an electron might make a transition from one of its specified non-radiating orbits to another of lower energy. When it does so, a photon is emitted having energy equal to the energy difference between the initial and final states.
The frequency of the emitted photon is then given by
hv – Ei– Ef
where, Ei and Ef are the energies of the initial and final states and Ei > Ef .
9. Limitations of Bohr’s Model
(i) Applicable only for hydrogen like atom.
(ii) Does not explain the fine structure of spectral lines in H-atom.
(iii) Does not explain about shape of orbit.
10. Important formulae related to Bohr’s model of hydrogen atoms are given below: 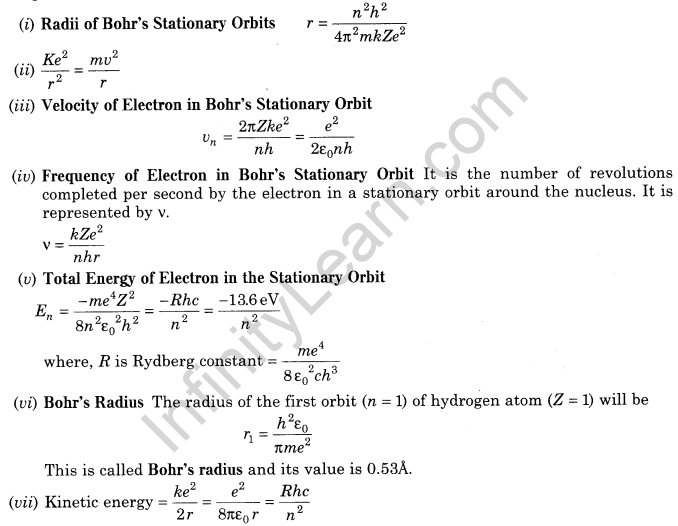 11. Energy Level The energy of an atom is the least when its electron is revolving in an orbit closest to the nucleus i.e. for which n = 1.
12. The lowest state of the atom is called the ground state, this state has lowest energy. The energy of this state is -13.6 eV. Therefore, the minimum energy required to free the electron from the ground state of the hydrogen atom is -13.6 eV.
13. (i) Emission Spectrum Hydrogen spectrum consists of discrete bright lines a dark
background and it is specifically known as hydrogen emission spectrum.
(ii) Absorption Spectrum There is one more type of hydrogen spectrum exists where we get dark lines on the bright background, it is known as absorption spectrum
14. The atomic hydrogen emits a line spectrum consisting of various series. 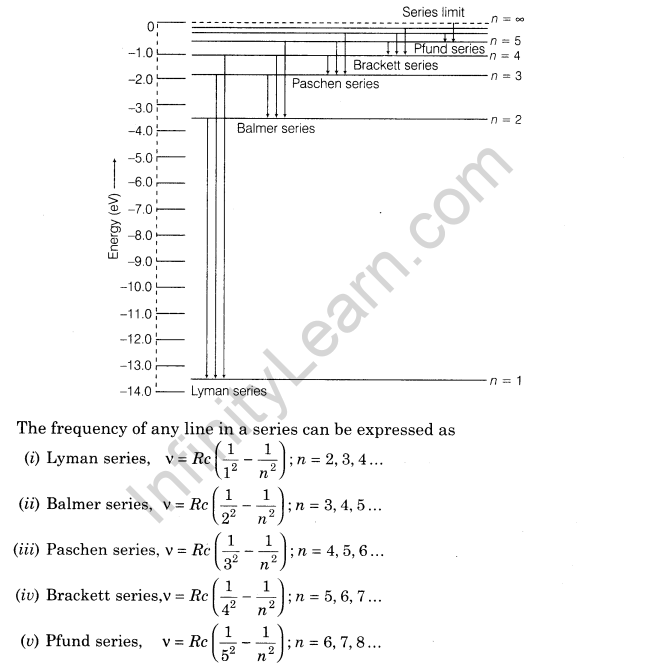