Palaeolithic: This term refers to the age where we find a large number of stone tools. It extends from 2 million years ago to about 12,000 years ago and is divided into Lower, Middle and Upper Palaeolithic.

Mesolithic: This period extends from 10,000 years ago to about 12,000 years ago. Stone tools found during this period were generally tiny and were called Microliths.

Neolithic: This was the period that dates back to about 10,000 years ago, and is, therefore, known as the New Stone Age.

The Earliest People: They were hunter-gatherers, a name derived from the way they collected food. They hunted animals, collected berries and fruits and gathered nuts, stalks and eggs. To hunt, they needed to move constantly, and to gather plant products, they needed knowledge about the edibility of plants and change of seasons.

Archaeological Evidence of Early Man: How do we know about the early man? This has been possible through an analysis of objects found, which were probably used by the early man. For example, tools made of stones, bones and wood.

Uses of Tools: Stone tools were used to cut meat and bones, scrape bark (from trees) and hides (animal skins) as well as to chop fruit and roots.

Choosing a Place to Live In: Dwellings chosen by the early man were located near sources of water, such as rivers and lakes as well as where the good quality stone was available for their tools.

Finding out about Fire: At Kurnool caves in Andhra Pradesh, evidence and traces of ash have been found suggesting use of fire. The fire might have been used as a source of light, to cook meat and to scare away animals.

A Changing Environment: About 12,000 years ago, there was a major change in the climate of the world. This change led to a shift to warm conditions, leading to the development of grasslands at many places which helped people to start thinking about the herding and rearing animals.

Habitation-cum-Factory Sites: Places where stones were found and early people made their tools. Sometimes, people lived (habitat) here for a longer span of time.

Bhimbetka: This is a place in Madhya Pradesh where we find examples of habitation sites, natural caves and rock shelters.

People who lived in the subcontinent about 2 million years ago were Hunter-gatherers. They hunted wild animals and gathered plant produce to get their food. They moved from place to place, in search of more food, water and resources.

Hunter-gatherers made and used various types of tools—tools of stone, wood and bone. 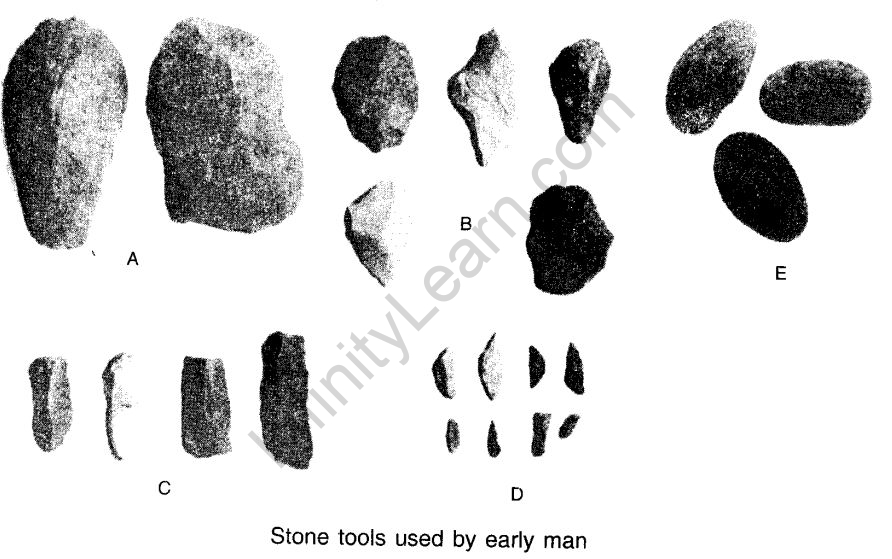 Habitation refers to the place where people lived.

Stone tools were made using different techniques like a stone on stone (using a stone to give required shape to another stone) and pressure flaking.

The fire was used by the early people. They used fire as a source of light, to cook meat and to scare away animals.

Grasslands developed in many areas due to change in climate around 12000 years ago. Herding, and rearing animals and fishing became common.

Several grain-bearing panes of grass, like wheat, barley, rice grew naturally in different parts of the subcontinent. The people also began growing plants on their own.

Many old caves have paintings on their walls. They show wild animals and are drawn with great accuracy and skill. A painting from a rock shelter.

In Hunsgi, a number of early Palaeolithic sites have been found. A large number of tools were also found, most of which were made of limestone.

Factory-Sites: Places where the stone was found and where people made tools are called Factory-sites.

Grasslands: Areas of land with high fertility and thus good for growing crops are called Grasslands.

Hunter-Gatherers: People who lived in the subcontinent about two million years ago and who hunted wild animals, caught fish and birds, gathered food to eat, were the Hunter-gatherers.

Palaeolithic: The part of history extending from 2 million years ago to about 12,000 years ago is called the Palaeolithic period.

Microliths: Stone tools of the Mesolithic period are called Microliths.