Fibres are very thin, thread-like strands from which fabrics (or cloths) are made. Some examples of fibres are cotton, wool, silk, flax, jute, nylon, polyester and polyacrylic. The fibres are spun into yarn (long continuous thread) which can then be woven on a loom to make a fabric (or cloth). Yam is a kind of long, twisted thread. Yarn is made from fibres by the process of spinning.

The wool comes from animals like sheep, goats, yak, camel, llama and alpaca. The wool yielding animals bear a thick coat of hair on their body. The hair gives us wool and keeps us warm during the cold winter season. The hair (wool) on the body of wool-yielding animals trap a lot of air. Air spaces between the wool fibres trap air. Since the air is a poor conductor of heat. So, the air trapped in hair shields the body from cold and keeps them warm in winter.

The hair is close to our skin, i.e. hair on our body and arms are soft and the hair on our head is coarse. Like us, the hairy skin of sheep has two types of fibres that form its fleece (or wool), i.e.

The fine soft under-hair provide the fibre for making wool. To obtain breeds of sheep that possess only fine under hair, their parents are carefully chosen. This process of selecting parents for obtaining special characters in their offspring such as soft under hair in sheep is termed selective breeding. Such sheep give not only better quality of wool but the yield per sheep is also higher.

Some Indian breeds of sheep which provide wool

From Fibres to Wool

The wool comes mainly from sheep. For obtaining wool, sheep are reared and bred, their hair is cut and processed into wool. We will first discuss the rearing and breeding of sheep.

Rearing sheep means looking after the sheep by providing them feed (food), shelter and health care. The persons who look after the sheep (or rearers) are called shepherds. Sheep are herbivores and prefer to eat grass and leaves. So, shepherds take their herds of sheep to the countryside for grazing. Apart from grazing, sheep rearers also feed them a mixture of pulses, corn, jowar, oil cakes (material left after taking out oil from seeds) and minerals. In winter, sheep are kept indoors and fed on leaves, grain and dry fodder.

The breeding of sheep is done to obtain such breeds of sheep which yield good quality of wool in large quantities. These breeds of sheep have a thick coat of hair on their body and are called sheep of good breeds. This raises the quality and quantity of wool produced.

Once, the reared sheep have developed a thick coat of hair, the hair is shaved off for getting wool. The cut off ‘wool coat’ of a sheep (along with a thin layer of skin) is called fleece. The fleece consists of soft woollen fibres. The fleece of sheep is usually kept in one piece.

Processing of Fibres into Wool

The wool which is used for knitting sweaters or weaving shawls is the finished product of a long process. Processing of fibres into wool involves the following steps:
Step I: The fleece of the sheep along with a thin layer of skin is removed from the body. This process is called shearing. The hair of the sheep is shaved off by using a saving machine similar to that used by barbers.
Shearing does not hurt the sheep because the uppermost layer of the skin of sheep is ‘dead’. The shearing (cutting the hair) of sheep is done in hot weather of summer so that sheep may survive without their protective coat of hair. The hair of sheep grow again before the onset of winter and protect them in cold weather. The fleece (or hair) of sheep provides woollen fibres. Woollen fibres are then processed to obtain woollen yarn.

Step III: After scouring, sorting is done. The process of separating the fleece of a sheep into sections according to the quality of woollen fibres (such as fine, coarse, long, short, etc) is called sorting. In sorting, the hairy skin is sent to a factory where the hair of different textures is separated or sorted. Every section of wool obtained after sorting contains the same quality wool. The same quality wool obtained is then mixed.

Step IV: The small fluffy fibres, called burrs, are picked out from the hair (burrs are soft, fluffy fibres in wool).
(After this, the fibres are scoured again and dried. The wool obtained after this is ready to be drawn into fibres).

Step V: The natural fleece or hair of sheep (or goat) is white, brown or black. The white woollen fibre obtained by sorting can be dyed in different colours.

Finally, we conclude that the sheep’s hair is sheared off from the body, scoured, sorted, dyed, combed and spun to obtain wool (for knitting sweaters) and woollen yarn (for weaving cloth). The quality of woollen cloth depends on the breed of sheep from which wool is obtained. 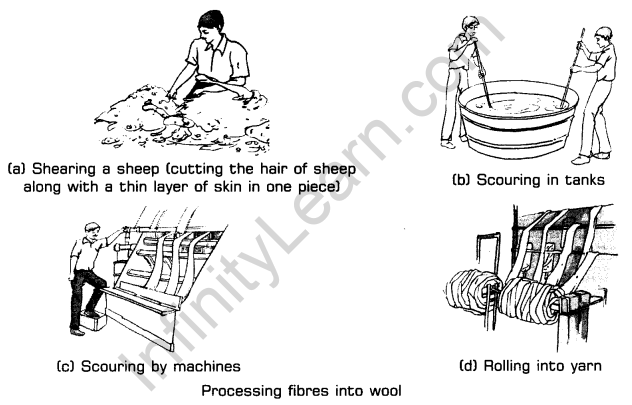 Occupational Hazard
The wool industry is an important source of livelihood for many people in our country. The people who do the job of sorting (separating) the fleece of sheep into fibres of different qualities are called sorters. The sorter’s job is very risky because sometimes, they get infected by the bacteria called anthrax which cause a deadly blood disease called sorter’s disease. The risks faced by people working in any industry due to the nature of their work are called occupational hazards. Sorter’s disease is an occupational disease.

Sericulture
Sericulture means ‘silk farming’. The rearing of silkworms for obtaining silk is called sericulture. Sericulture is a very old occupation in India. India produces a lot of silk on a commercial scale. Before we discuss the process of obtaining silk, it is necessary to know the interesting life history of the silk moth.

The female silk moth lays eggs on mulberry leaves. The eggs are hatched into very small larvae within a week. The larvae of silk moths are called caterpillars or silkworms. The silkworms feed on the leaves of the mulberry tree and grow bigger.

When the silkworm (or caterpillar) is ready to enter the next stage of its development called pupa, it first weaves a net to hold itself. Then, it swings its head from side to side. During this movement of the head, the silkworm secrets fibre made of protein which hardens on exposure to air and becomes silk fibre (or silk thread). Soon the silkworm (or caterpillar) covers itself with silk fibres and turns into a pupa. This covering is known as a cocoon. The silkworm continues to develop in the form of a pupa inside the cocoon to form the silk moth.

To produce silk, the silkworm developing inside the cocoon (as pupa) is not allowed to mature into an adult silk moth. So, as soon as the cocoon is formed, it is used to obtain silk fibres and the developing silkworm (as pupa) gets killed. Some of the silkworms (as pupae) are, however, allowed to live and mature into silk moths so that they can lay eggs to produce more silkworms. 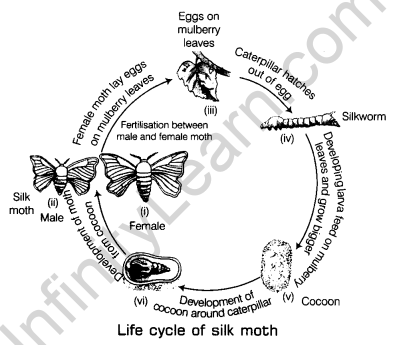 Pure and Artificial Silk
Pure silk is obtained from the cocoons of silkworms and is made up of protein. Artificial silk is obtained from wood pulp and it is made of modified plant material ‘cellulose’. Just like silk, wool is also made up of proteins. So, a piece of woollen fabric also burns to give the smell of burning hair. The thread which burns to give a smell of burning paper will be cotton fibres. Cotton and paper both are carbohydrates. Paper is made of cellulose obtained from wood pulp. So, burning cotton and paper both give a similar smell.

From Cocoon to Silk
For obtaining silk, silk moths are reared and their cocoons are collected to get silk thread.

Rearing Silkworms
A female silk moth lays hundreds of eggs at a time. The eggs are stored carefully on strips of paper or cloth and sold to silkworm farmers. The farmers keep eggs under hygienic conditions. They warm them to a suitable temperature for the larvae to hatch from an egg.

The larvae are kept in clean bamboo trays along with young and freshly chopped mulberry leaves. After 25-30 days, the silkworms stop eating and start spinning the cocoons. Small racks or twigs may be provided in the trays to which cocoons get attached. 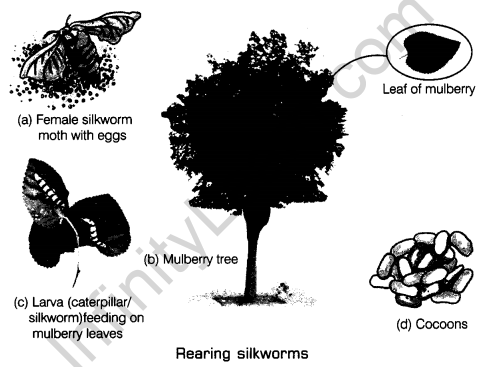 Processing Silk
The cocoons are collected and boiled in water to kill the insect inside them. The resulting fibre is known as raw silk. The silk fibres separate.

Reeling the Silk
The process of taking out fibres from the cocoon for use as silk is known as reeling the silk. Reeling is done in special machines. Silk fibres are spun into silk threads which are woven into silk cloth by weavers.

Discovery of Silk
The discovery of silk was made in China a long time bach. According to an old Chinese legend, the empress Si-tung-Chi was ashed by the emperor Huang-ti to find the cause of the damaged leaves of mulberry trees growing in their garden. The empress found white worms eating up mulberry leaves. She also noticed that they were spinning shiny cocoons around them. Accidentally, a cocoon dropped into her cup of tea and a tangle of delicate threads separated from the cocoon. The silk industry began in China and was kept a closely guarded secret for hundreds of years. Later on, traders and travellers introduced silk to other countries. The route they travelled is still called the ‘silk route’.

Even today, China leads the world in silk production. India is also among the leading silk-producing countries of the world. In India, a large number of women are engaged in various activities related to the silk product such as the rearing of silkworms, reeling of silk from cocoons and processing of raw silk into fabrics.