Question 3.
Write the meaning of ‘digital divide’. [1] Answer:
Opportunities emerging from the Information and Communication Technology based development is unevenly distributed across the globe. There are wide ranging economic, political and social differences among countries. While developed countries in general have surged forward economically, politically and socially, the developing countries have lagged behind economically, politically and socially and this difference is known as the digital divide. Similarly digital divides exist within countries.

OR
Air pollution is a serious problem because it causes various diseases related to respiratory, nervous and circulatory systems.

Question 9.
Study the given diagram carefully and answer the questions that follow : [1 + 2 = 3] 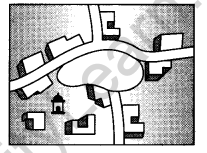 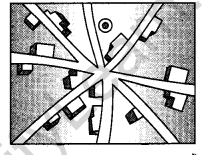 (9.1) Identify and name the pattern of rural settlement shown in the diagram.
(9.2) Explain any two characteristics of this type of pattern of rural settlement.
Answer:
(9.1) Circular pattern.
OR
(i) Circular pattern is developed around lakes and tanks.
(ii) Central part remains open and is used for keeping animals to protect them from wild animals.
OR
(i) Star-like pattern.

Question 10.
Study the following table and answer the questions that follow : [3] Decadal Growth Rates in India, 1901-2011 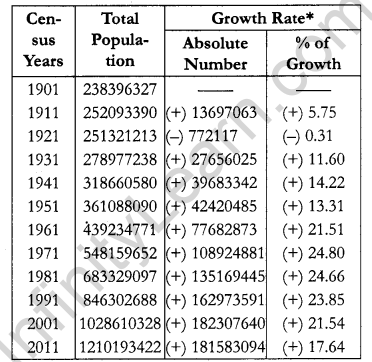 Question 12.
Describe the importance of sea routes in handling India’s foreign trade. [3] Answer:
The sea routes offer a smooth highway traversable in all directions with no maintenance costs. Compared to land and air, sea route is a cheaper means of haulage (carrying of load) of bulky material over long distances from one continent to another. The development of refrigerated chambers for perishable goods, tankers and specialised ships has also improved cargo transport. The use of containers has made cargo handling at the world’s major ports easier.

Question 13.
Examine the level of urbanisation in India after independence. [4] OR
“Towns flourished since prehistoric times in India.” Examine.
Answer:
Total urban population has increased eleven-fold during the twentieth century. Enlargement of urban centres and emergence of new towns have played a significant role in the growth of urban population and urbanisation in the country. But the growth rate of urbanisation ha’s slowed down during last two decades.
OR
Town flourisned since prehistorical times in India. The prehistoric towns developed along the rivers. Even at the time of Indus Valley Civilisation, towns like Harappa and Mohanjodaro were in existence.

The follow period has witnessed evolution of towns. It continued with periodic ups and downs Until the arival of Europeans in India in the 18th century. On the basis of their evolution in different periods, Indian towns may be classified as Ancient towns, Medieval towns and Modern towns.

Formula = Density of Population = Population/Area Four geographical factors that influence the distribution of papulation in the world :

OR
Characteristics of a large scale manufacturing :

OR
Factors that affect the development of inland waterways :

OR
Factors that helped in the development of ‘Mumbai- Pune Industrial region’:

Question 21.
Identify the five geographical features shown on the given political outline map of the world as A, B, C, D and E. Write their correct names on the lines drawn near them with the help of the following information :
(A) An industrial region
(B) A major seaport
(C) The terminal station of a transcontinental railway
(D) An international airport 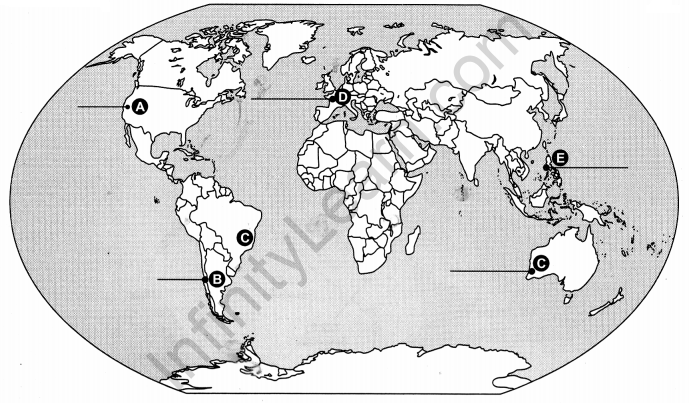 Question 22.
Locate and label any five of the following geographical features with appropriate symbols on the political outline map of India : [5 × 1 = 5] (22.1) The state with highest level of urbanisation.
(22.2) The leading state in the production of coffee.
(22.3) An oil refinery in Haryana.
(22.4) The steel plant setup in collaboration with U.K.
(22.5) An international airport in Assam.
(22.6) The major seaport in Odisha.
(22.7) The Headquarters of North-Eastern Railway.
(22.8) Singareni coal mines.
Answer: 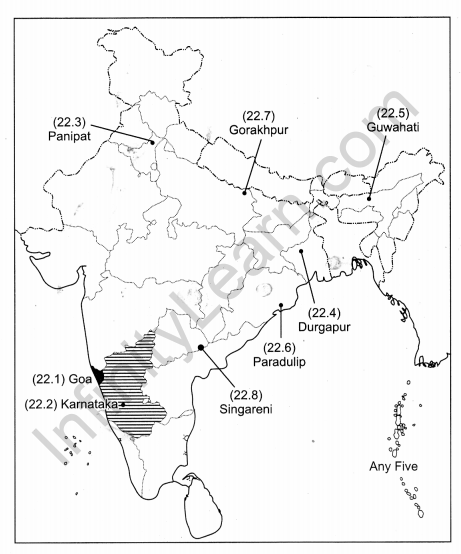 Question 3.
Write the meaning of ‘Tourism’. [1] Answer:
Tourism is the travel undertaken for the purpose of recreation rather than business.

Question 6.
Examine the importance of irrigation in Indian context. [1] Answer:
Irrigation is needed for agriculture due to uneven distribution of rainfall from time to time and place to place in the country.

Question 8.
Explain the concept of environmental determination with examples. [1 × 3 = 3] Answer:
Concept of Environment Determinism : In the early stages of their interaction with their natural environment, humans were greatly influenced by it. They adapted to the dictates of nature. This is so because the level of technology was very low and the stage of human social development was also primitive. This type of interaction between primitive human society and strong forces of nature was termed as Environmental Determinism.

Question 18.
“Lack of ‘land reforms’ and ‘degradation of cultivable land’ are the major problems of Indian agriculture.” Substantiate the statement. [21/2 + 21/2 = 5] Answer:
Major problems of the Indian Agriculture :

Question 20.
“Waterways is an important mode of transport for both passenger and cargo traffic in India.” Support the statement with examples. [1 × 5 = 5] Answer:
Importance of water transport in India :

Question 3.
Write the meaning of ‘Trading Centres’. [1] Answer:
Trading Centres : Places where buying and selling of commodities and services take place are known as trading centres.

Question 6.
Examine the importance of ‘Lagoons and Backwaters’. [1] Answer:
They are used for fishing and irrigating certain varieties of paddy crops coconut, etc.

Question 8.
Examine the concept of ‘Possibilism’ with suitable examples. [1 × 3 = 3] Answer:
With the passage of time, people begin to understand their environment and the forces of nature. With social and cultural development, humans develop better and more efficient technology. They move from a state of necessity to a state of freedom. They create possibilities with the resources obtained from the environment. The human activities create cultural landscape. Human activities take place everywhere—health resorts on highlands, huge urban sprawls, fields, orchards and pastures in plains and rolling hills, ports on the coasts, oceanic routes on the oceanic surface and satellites in the space.

Nature provides opportunities and human beings make use of these and so gradually nature gets humanised and starts bearing the imprints of human endeavour.

Question 15.
Describe any five features of ‘plantation agriculture’ practised in the world. [1 × 5 = 5] Answer:

Question 18.
“After independence various important strategies were adopted for agricultural development in India.” Substantiate the statement. [1 × 5 = 5] Answer:
Indian agricultural economy was largely subsistence in nature after Independence. During partition about one-third of the irrigated land in undivided India went to Pakistan.