Soil is one of the most important natural resources. It is the uppermost layer of the earth’s crust which is blackish-brown in color. Major functions of the soil are:

Soil contains air, water, and countless living organisms like fungi, bacteria, insects (like ants and beetles), earthworms, rodents, moles, and plant roots. Some organisms are too small that they cannot be seen by naked eyes (e.g. fungi and bacteria). An important soil organism is an earthworm, it is visible only in the rainy season. It increases the fertility of the soil. An analysis of different soil samples is summarised in the table given below:

Therefore, we see that different soils from different sites have various plants, animals, and waste materials in them.

Soil Profile
Soil is formed by breaking down rocks by the action of wind, water, or climate by the process called weathering. During this process, the rocks are worn away to form small particles by long exposure to the elements of weather.

Weathering is a very slow process as it takes thousands of years for a huge rock to turn into fine particles. The nature of the soil depends upon the rocks from which it has been formed and the types of vegetation that grow on it.

The soil profile is a vertical section through different layers of the soil.

Soil profile consists of different layers of soil which are called horizons. Each horizon differs in texture, color, depth, and chemical composition. Different horizons of the soil are discussed further.

1. A-Horizon or Topsoil
It is the uppermost layer of soil and is usually dark in color because of the presence of minerals and humus in it. It provides the nutrients in plants since the roots of most plants are confined to this layer. Humus is the dark brown colored layer that consists of dead, rotting remains of plants and animals. 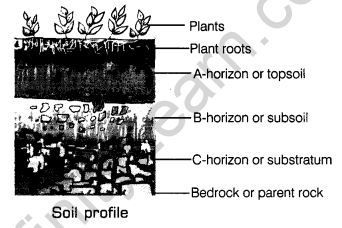 Humus helps in making the topsoil porous. This layer is generally soft and retains more water in it. This layer provides shelter for many living organisms like earthworms, rodents, moles, and beetles.

2. B-Horizon or Subsoil
This layer of soil lies just below the topsoil. Subsoil is made up of slightly bigger rock particles than that of the topsoil. It does not have much humus and is lighter in color than topsoil. It is somewhat harder and more compact than the topsoil. This layer is less fertile than topsoil and contains few living organisms. The subsoil is rich in minerals and iron oxides.

3. C-Horizon or Substratum
The layer of soil which lies just below the subsoil is called C-horizon. It consists of small pieces of broken rocks with cracks and crevices, formed by the weathering of bedrock or parent rock.

Unweathered solid rock found below the C-horizon is called bedrock. It is non-porous and can produce soil over a long period. Rainwater gets collected over it to form the water table.
This layer is hard enough and is difficult to dig with a spade.

(ii) Silt: These are made up of somewhat bigger rock particles than clay. It is not so smooth as clay. Silts are found deposited at river beds. Floods deposit the silt from rivers in the field.

(iii) Sand: These are made up of larger particles enough than that of silt and can be easily seen. These are coarse to touch due to their larger size.

The soil in different geographical areas contains different proportions of sand, clay, and silt in them. It also contains a small amount of hummus in them. Depending upon its composition, soil can be classified as sandy soil, clayey soil, and loamy soil. The size of the particles in the soil influences its properties.

(i) Sandy soil These contain mainly sand. These are quite large particles. There are large spaces between them that are filled with air. Water can drain quickly through these spaces. The sandy soil tends to be light, well aerated, and rather dry. Since it is aerated, can be plowed easily, and cannot retain water, so it is not good for plants. Since it is light, it can be easily blown away if left bare. It does not possess humus, thus it is less fertile. It can be made fertile by adding manure to them which increases its water-holding capacity. This soil is not sticky and therefore, these cannot be used to make pots, bricks, toys, and statues.

(ii) Clayey soil’ Clay particles are smaller and packed tightly so that it leaves a little space for air. Water drains very slowly through clayey soil. These also contain very little humus. It is heavier than sandy soil. Clayey soil is more fertile than sandy soil.
The fertility of clayey soil can be improved by adding some sand and humus to it. Clayey soil is very sticky and can be used to make pots, bricks, toys, statues, etc.

(iii) Loamy soil is a mixture of sand, clay, and silt with a small amount of humus in it. Therefore, it is very fertile and the best topsoil for growing plants. It has a water holding capacity and excess water can also be drained out through it easily. It is smooth, partially gritty, and sticky soil.

The rate of percolation can be calculated by using the following formula:
Percolation rate (mL/min) = \(\frac { Amount of water (mL) }{ Percolation time (min) }\)

The percolation rate is highest in sandy soil because it is very loose. On the other hand, clayey soil is very compact and therefore has the lowest rate of percolation. The rainwater moves or reaches too well faster and in a greater amount from sandy soil.

Since clayey soil can retain water in them. These are the best soil to grow paddy because paddy requires standing water in fields. The kutcha (unpaved) road due to percolation of water becomes dry after rain while pakka road does not.

Moisture in Soil
The soil contains some water in it which is called soil moisture.
Usually, ‘moisture is present as a thin film around the soil particles. This moisture is absorbed by the roots of plants. Thus, the moisture content of the soil is very important for the growth of crops.

Absorption of Water by Soil
Soil contains moisture in it but it can still absorb or soak a lot of water. But soil has the limit to absorbing water in it. The ability or capacity of the soil to absorb a limit of water is called absorption percentage. It can be calculated as follows:

Water Retention
The ability of soil to hold water is called water retention. The space between soil particles is called pores provides the passage for gases and moisture within the soil.

The ability of soil to retain water is strongly related to particle size. Water molecules hold more lightly to the fine particles of the clayey soil than the coarser particle of sandy soil.

When we perform this activity with different soil samples, we will see that.

Different types of soil are found in different parts of India. Soil is mainly affected by wind, rainfall, temperature, light, and humidity. Some climatic factors also affect the soil profile and bring changes in the soil structure. The plants that grow on the surface of the earth are called vegetation. It includes green grass, herbs, shrubs, bushes, crop plants, and trees.

Vegetation is mostly in the fertile topsoil of the earth and covers the soil like a green sheet spread on the surface of the earth.
The component of soil along with various climatic factors determines the type of vegetation in a particular region.

A Case Study
John, Rashida, and Radha went to Leeladhar Dada and Santosh Malviya ofSohagpur in Madhya Pradesh. Leeladhar Dada was preparing the soil to make items like surah, matki, Kalla (earthen frying pan), etc. John asked him the complete procedure of making such items. A summary of the conversation they all had with Leeladhar Dada is given below:

Soil Erosion
The removal of land surface by water wind or ice is known as erosion. The topsoil is very fertile and in the absence of it, the plants cannot grow. In the absence of plants, the soil becomes loose. As the plant roots bind to the soil. Soil erosion is mainly caused by the large-scale cutting of forest trees and plants. This process of cutting down trees is called deforestation. Erosion of soil is more severe in areas with little or no surface vegetation like the desert or barren land. Therefore, cutting of trees and deforestation must be prevented. The effects of soil erosion are famines, flood desertification, and damage or spoilage of the environment.