How Much Water Do We Use?

Question 2.
What are the various activities for which water is needed?
Answer:

Question 3.
Why is water important for us?
Answer:

Question 5.
What do you mean by potable water?
Answer:
The water which is suitable for drinking is called potable water.

Where do We Get Water From?

Question 2.
What is the ultimate source of water?
Answer:
Rain. 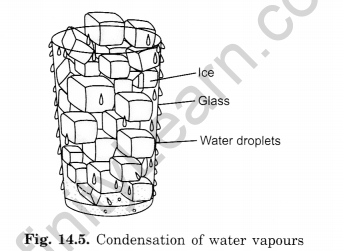 Question 4.
Explain the role of plants in adding water vapours into atmosphere.
Answer:
There is yet another process through which water vapour gets transferred into the air. This process involves plants. All plants need water to grow. Plants get this water from the soil, which is absorbed from it by their roots. A part of this water is used by them to prepare their food. Some water is retained by different parts of the plants like roots, stem, leaves, flowers and fruits. However, a large part of this water is released by the plants into air as its vapour. Most of the water lost by the plants in this process is through their leaves. This process is known as transpiration.

Every plant whether it is in a crop field, a forest, on the roadside or in a kitchen garden transpires to give off water vapour. The amount of water vapour that goes into the air through the process of transpiration is very huge. To give an idea, let us consider an example. Suppose a crop of corn has been sown in a plot which is 100 metre long and 100 metre wide. The amount of water that this crop of corn would lose through transpiration during one season would be roughly eQuestionual to water in a 90 centimetre high tank spread over the plot of land.

Water lost through transpiration by wheat plants that give us one kilogram of wheat is roughly 25 large sized buckets full of water, i.e., nearly 500 litres.

Thus, we can see that water vapours get continuously added to air by the plants during the process of transpiration.

Question 5.
Briefly describe the water cycle. Also explain its importance.
Answer:
Water on heating turns into water vapour. Water vapour on cooling gives water again. The change of water from one form to other form over and over again makes the water cycle in nature.

The rain is absorbed by the soil. A part of rain water collected in the rivers flows into the sea, where again the evaporation occurs. This completes the water cycle (Fig. 14.8).

Thus, now we know how water gets circulated between the oceans and land through evaporation, transpiration, precipitation and its downhill flow by different routes. This process of circulation of water is known as water cycles. Water cycle helps in maintaining continuous supply of fresh water to all living things on land. No life on land would have been possible without water cycle.

Question 6.
What is the importance of water cycle?
Answer:
The water cycle is important for us because of the following reasons: 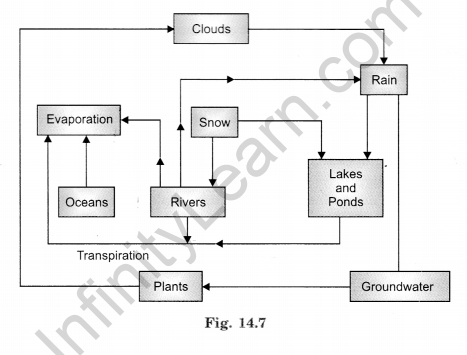 Question 9.
We know that water changes into vapour when heated. But it is a common experience that water from wet roads, rooftops and floors disappears without heating. Explain how water changes into its vapour even without heating?
Answer:
During the day time, sunlight falls on the water in oceans, rivers and lakes. The fields, roads, rooftops and other land areas also receive sunlight. The sunlight also carries heat with it. As a result, water from oceans, rivers, lakes and the soil, and other land areas gets continuously changed into its vapour. 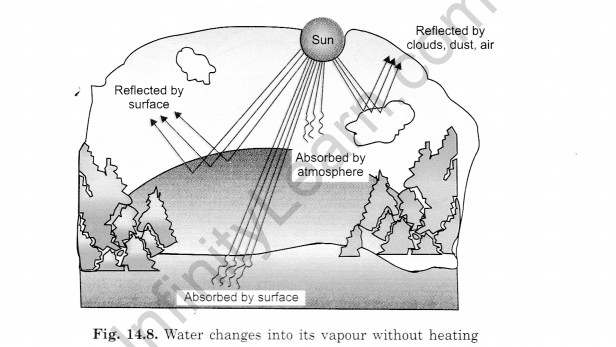 The water vapour present in the air moves to different places along with the wind. When vapour reaches at a certain height, it gets cooled and turns into very tiny water droplets. These droplets become visible to us in the form of clouds. Ultimately, the water comes down to the surface in the form of rain or snow. This process of conversion of vapour into water is known as condensation.

Circulation of water by evaporation and condensation in this manner is known as water cycle.

Question 11.
What is precipitation? Does precipitation in atmosphere always result in rain?
Answer:
We think of rain or snow when clouds appear in the sky. But, many a times, it does not rain even though the sky may be covered with clouds. We now know that clouds carry small droplets of water in them. It may so happen that:

Many a times, especially during winter nights, the air near the surface becomes Questionuite cool. As a result, the water vapour present in it condenses to form water droplets. These water droplets appear as dew, which you might have observed on leaves or flowers in the morning during winters.

Question 12.
What is transpiration and write the factors affecting it?
Answer:
A part of water absorbed by the plants is released by plant through their leaves into the air by a process called transpiration.
Transpiration is affected by the following factors:

Activity 2 (page 139)
Take two similar plates. Place one of the plates in sunlight and keep the other under shade. Now, pour eQuestionual amount of water in each of the plates (NCERT Fig. 14.5). You can use a cap of a bottle to measure water. Make sure that water does not spill over. Observe the two plates after every 15 minutes. Does the water seem to disappear? From which plate does it disappear first? What is the source of heat for this evaporation?

Yes, the water seems to disappear. It disappears first from the plate kept in the sunlight. The sun is the source of heat for evaporation.

Back To The Oceans

Question 1.
Explain various paths by which water that falls on land as rain goes back to oceans.
Answer:
Water that falls on the land as rain and snow sooner or later goes back to the ocean This happens in many ways.
Almost all land surfaces are above the level of oceans. When rain falls on the land, the water flows down towards the ocean This flow of water is often in the form of rivers and streams. Sometimes, the water gets trapped in large craters and natural basins on its way to the ocean The rainwater fills up the craters or basins to form lakes. If the lakes or basins have an outlet like a river, the water again begins to flow towards oceans

A part of the rainwater gets absorbed by the ground and seems to disappear in the soil. Some of this water is brought back to the air by the process of evaporation and transpiration. Rest of it continues to seep deeper and deeper under the ground until it is stopped by layers of rock that do not allow water to pass through them. This water is known as groundwater. However, this water may seep through those rocks that let the water to pass through. The water then appears as a spring. Many lakes, ponds and wells are fed by such springs.

Water deposited in the form of snow in mountains also finds its way to an ocean or a sea. Water in rivers, like Ganga and Yamuna, is due to the melting of snow in the lower regions of the Himalayan mountains. All these rivers ultimately terminate in the sea.

What If It Rains Heavily?

Question 1.
In which seasonal most of the rain occurs in our country?
Answer:
Monsoon season.

Question 2.
What are the consequences of large and prolonged rain?
Answer:
Excess of rainfall may lead to rise in the level of water in rivers, lakes and ponds. The water may then spread over large areas causing floods.

Question 3.
What are the major losses due to the flood?
Answer:
In our country, floods cause extensive damage to crops, domestic animals, property and human life.

What Happens If It Does Not Rain For A Long Period?

Question 1.
What would happen if it does not rain in a region for a year or more?
Answer:
It will result in a drought.

Question 2.
What are the consequences of drought?
Answer:
In drought conditions, it is difficult to get food and fodder

Question 3.
What do you understand by epidemic?
Answer:
Epidemic refers to the disease that spreads over a large population of distant areas, e.g., cholera, plague, etc.

How Can We Conserve Water?

1. Collecting water from the rooftops of houses, flats and other buildings: Rainwater that falls on the rooftops is brought down through pipes and collected in pits. The sides of these pits are lined with concrete. Their bases, however, are unlined and have layers of stone chips, sand and coal tar. These layers sieve the water as it slowly, seeps through into the ground. This raises the level of the groundwater. The groundwater can be used in the future by bringing it up with hand pumps and borings.

2. Collecting water at street corners: Rainwater that falls on tarred roads is completely wasted as it does not seep into the ground. This water can be collected by making holes in the pavement at street corners. The rainwater can then be collected in pits under the pavement and slowly seeped into the ground. Jamia Hamdard University in Delhi has already started using this way of water harvesting.

You will be surprised to learn that even in our city, rainwater is being collected above the ground for direct use. For example, the prisoners of Delhi jail have built a j large cemented pond to collect rainwater. The prisoners use the rainwater collected in this pond for their daily needs. Similarly there is a bus depot that collects and stores rainwater to use for washing buses. Provisions are being made under the flyover at the Dhaula Kuan crossing to harvest the rainwater that collects there and to send this water underground through pipes.

Question 2.
What are the various methods of rainwater harvesting?
Answer:

Question 1.
Match the following items given in Column A with that in Column B:

Question 3.
Fill in the blanks with appropriate words:

Question 4.
State whether the statements given below are True or False

Question 5.
Choose the correct option in the following questions:
(i) Which one is a process in which water changes into vapours in atmosphere?
(a) Evaporation
(b) transpiration
(c) Precipitation
(d) condensation
Answer:
(a) Changing water into vapours is called evaporation.

(iv) Which is a result of condensation of water vapours?
(a) Rain
(b) Snowfall
(c) Hail
(d) Tiny water droplets
Answer:
(d) Water vapour, being brighter, rises up in the atmosphere and cools down. It further condenses to form tiny droplets.

(vi) Circulation of water between ocean and land is known as
(a) water cycle
(b) rain cycle
(c) water management
(d) water harvesting
Answer:
(a) Constant flow of water from the earth to the atmosphere and back to the earth is known as water cycle if

(viii) Out of these, which is not a source of surface water?
(a) rain water
(b) river and lake water
(c) Spring water
(d) sea water
Answer:
(c) Rainwater, river water and sea water are the examples of surface water.