Rural Settlements
They are mainly smaller in size and poorly spaced. The people of these settlements are mainly engaged in primary activities like, agriculture, fishing, mining, etc, e.g. people surviving in hamlets and villages.

Factors Determining the Rural Settlements
There are various factors and conditions responsible for having different types of rural settlements in India. These are:

Types of Rural Settlements
Types of the rural settlements are determined by the above determinants as well as by the extent of the built up area and inter-house distance. In India, Rural settlements can broadly divided into four types:

Evolution of Towns in India
The evolution of towns started in India from prehistoric times, e.g. Harappa, Mohenjodaro towns, European colonies of modern period, etc.
Indian towns may be classified into three groups on the basis of their evolution in different periods:

Ancient Towns
These towns were developed over 2000 years ago by the various kings as religious and cultural centres, e.g. Varanasi, Prayag (Allahabad), Pataliputra (Patna), Madurai, etc.

Modern Towns
These towns were developed by the Britishers and other Europeans in India. These are further divided into the following groups:

Classification of Towns on the Basis of Population Size
Census of India is responsible for defining and classifying urban areas in India. Cities and urban areas are classified into six classes by census of India.
Urban areas use their population size as base. Thus, an urban Area that have population of more than one lakh is considered as city or class I town. 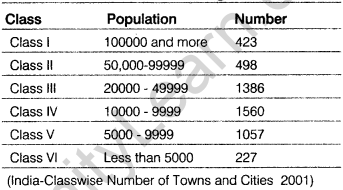 Examples of these outgrowth may be in the form of railway colonies, university campus, part area, military cantonment, etc.
According to the given table, class IV cities are highest in number but larger proportion of urban population lives in class I cities (61.48%).
Besides these towns, India has 423 cities. Among them, 35 cities or urban agglomeration are metropolitan cities. Six of them are mega cities with population over 5 million each.
For e.g.. Greater Mumbai being the largest urban agglomeration with 16.4 million population, followed by Kolkata, Delhi, Chennai, Bengaluru, and Hyderabad.

Functional Classification of Towns
Apart from population size, Indian towns and cities can be classified into the following heads on the basis of their functions (dominant economic activity):

The functions of these cities are not fix and change with the time as cities are dynamic in nature. With increase in population, cities become metropolis and multi-functional i.e. industry, business, administration, transport, etc. Thus, classification of these cities on the basis of specialised function is impossible as all the functions are interlinked.